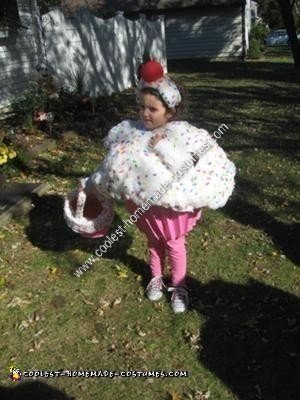 My niece Brianna, she is 6 years old and every Halloween we go Trick or Treating with our whole family. It has been a tradition since she was born and I usually make our costumes. This year she wanted to be a cupcake so I decided for everyone to build around that.

So… I Aunt Gigi was the Baker, my boyfriend Michael was the Oven, my sister MaryAnn was the Baker’s wife, my brother-in-law was the Doughnut, my Aunt Susann was the Crispy cream girl, my mother was the Baker’s Mother and my boyfriend’s sister Jennifer was the Queen of Tarts. The costumes that I made were, The Cupcake & The basket, the Baker & the Oven. The cupcake bottom is made from a lamp shade and an accordion paper shade spray painted pink and then I hot glued it around the lamp shade.

I made adjustable suspenders on the shade so it would stay on and be comfortable as for the top (frosting) I made it like a vest. It is poly foam sprayed and glued to white felt and then pulled the bottom through a large round needle point wooden ring I found at the craft store. I wanted it to sit easily on top of the rim of the shade and it did. The sprinkles are made from craft foam which I cut into little pieces and sprayed glued all over. Her cherry headband is a large green foam ball sprayed red with a piece of a fake flower stem and hot glued to a wide headband.

Finally her Cupcake basket was from an old Easter basket I had which I covered with the left over paper shade and cut out white felt and hot glued and added the sprinkles the same way. I had a blast! I can’t wait until next year! 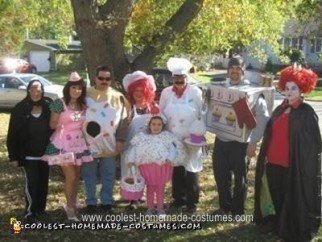 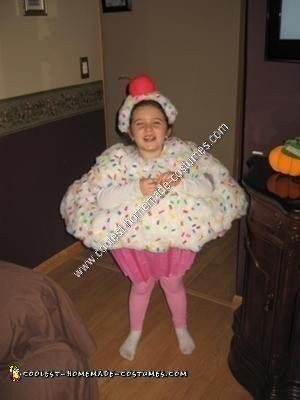 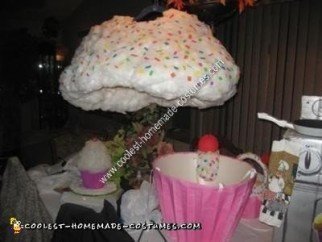