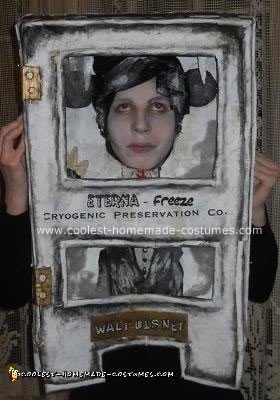 One of the most prevalent myths about Walt Disney is that he was Cryogenically frozen after death in the hopes that one day technology would advance enough to bring him back to life.

For my Homemade Cryogenically Frozen Walt Disney Costume, I chose to create Walt Disney in his Cryogenic fridge. The fridge is made out of a box with windows cut out and fake hinges (made out of cardboard) attached. There is a hole cut out in the back of the box for my face to poke through.

I edged the windows with paper rolls to add dimensionality. The icicles hanging from the top of the box are made from aluminum foil covered in white paint, and the frosty air is made by taping polyester stuffing to the inside edges of the windows. Walt Disney’s body is made of stuffed and painted newspaper, and his hand is an old glove.

I “borrowed” a tie from my father, and made Walt’s shirt collar out of triangles cut from paper towels. Walt Disney’s hair is made of felt stapled to the cardboard, and his mouse ears are circles cut from glitter felt and glued to the background. I covered my face in pale makeup (including my eyebrows to make them appear frosted.) The name plate is made of cardboard.