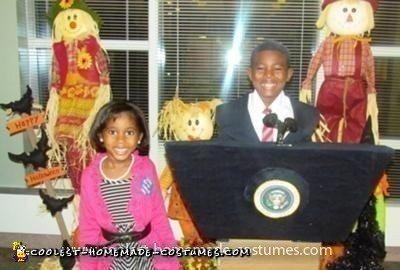 I always tell my 10 year old that he could be a young Barack (because of his ears) so the current President of the United States seemed like the perfect costume for him. My daughter, who is 6, coincidentally made a great little Michelle.

My daughter’s outfit was pretty simple, I bought her a little dress and sweater and a belt to go over both…finish off with a pearl necklace and earrings…very typical Michelle Obama style. With some construction paper and fabric glue, I also made her a button that said “Vote for my husband, 2012”

The podium was a cardboard box with the bottom and top cut out. Then I took a piece of foam board, cut the front into the podium shape and folded a 6 inch piece over the top of the box. I covered the box and the foam board in blue material purchased in the craft department. I left some of the box exposed for the “wood” effect on the bottom. The foam board was glued to the front of the box and I let it dry overnight.

For the microphones, I broke a headband in half and used the two “half U” shapes. Then I covered cotton balls in black felt and taped them, with black duct tape, to the top of the headband halves. I taped them separately first and once they looked thick enough….I taped them together. I put a wire coat hanger in the bottom of the microphone unit, secured that with more tape, and stuck the other end of the hanger into the portion of the foam board that was folded over the front of the box. I taped that underneath the the foam board to keep it in place.

For the Presidential seal, I took a Styrofoam plate, covered it in the same blue material and glued to the front of the foam board. I then printed out the seal from the internet and glued it on the plate.

Keeping the box secure was tricky so I taped a belt inside of the box and put it around his waist. It wasn’t very sturdy, he did have to hold is some of the time…someone recommended suspenders but I never ended up trying it.

This Homemade Barack and Michelle Obama Couple Costume was a very easy costume to make and it was a big hit in my area! 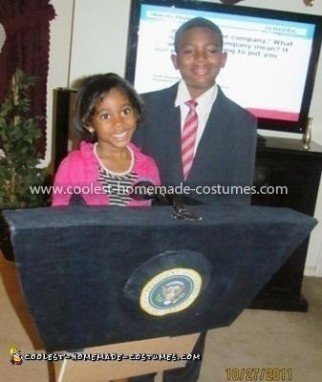 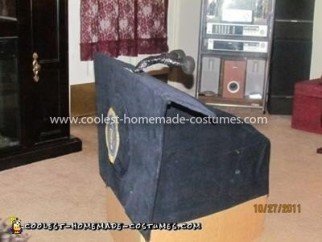 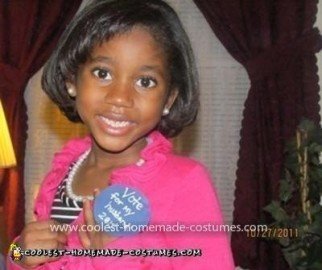