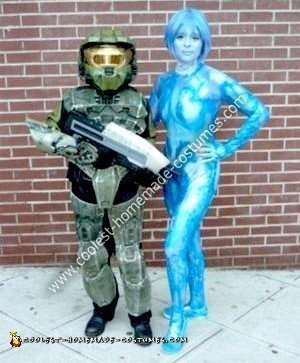 My son and I have always had coordinating costumes every year for the past 11 years. He has wanted to be Master Chief from the Xbox 360 Halo game but this costume does not come in child sizes and they do not even make a Cortana costume. When the adult version of the Master Chief costume came out I was able to just alter it to fit him and added the arm armor to his thighs and purchased the gloves that come with the arm armor to complete the look. My fiance took apart the Buzz Bee gun and painted it black and gray to look like the real thing to complete our Homemade Cortana Costume.

When it came to Cortana I wanted to get as close as possible to the color in the game. I have seen some attempts from other people and just wanted to make myself glow like a hologram. I purchased a sky blue unitard (looks more like a periwinkle) and met with a very talented Airbrush artist who does custom work in the NJ & NY area. I spent over 5 hours in the suit standing as he airbrushed freehand the entire suit just by looking at pictures.

I then purchased a light purple/blue mix wig and he sprayed that using the same colors to blend the hair in with the suit. I purchased light blue contacts so that my dark brown eyes would not stand out against the blue make-up. I used sky blue creme make-up and a glitter powder base over the blue makeup to get the shiny effect like the suit.

As for the shoes, they are Isotoner slippers which I also had the airbrush artist paint. The result after all that time in preparation is a custom made Cortana and Child size Master Chief original. 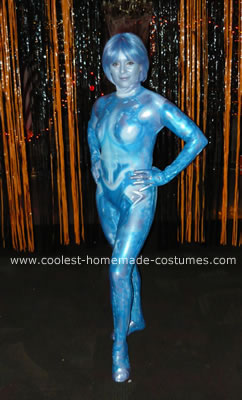 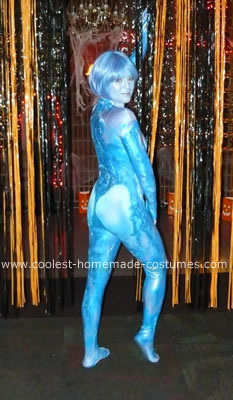 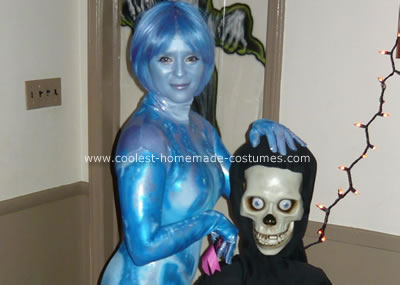