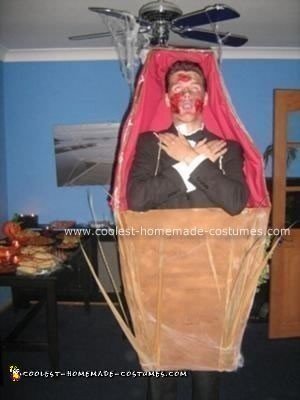 This Corpse in a Coffin Costume was my Halloween costume last year. I didn’t want to go to the party in a costume hundreds of other people would be wearing so I came up with idea off being a dead man in a coffin.

I built the coffin out of cardboard and then added a door with “RIP” in raised writing on the front. I paper mached the whole thing to give it more of a wooden effect and then painted it brown.

I got an old red sheet and lined the inside of the door and top half of the coffin to give it a better look. Finishing touches were to add some fake cobweb and so real ivy clipping and some leaves of some of my garden plants. It gave it a really good eery look!

I wore a tuxs with bow tie and added some prosthetic decomposing wounds.

1 thought on “Coolest Homemade Corpse in a Coffin Costume”