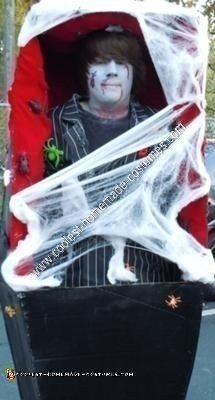 I made this homemade corpses in a coffin Halloween costume idea so that I could win a contest in Placerville, California for the best Halloween costume. I won both 1st place in the teenage division of the contest and also 1st out of all the winners for the grand prize. I had about 30 pictures taken of me that night and one video.

The base and sides of the costume are made from cardboard which are hot glued together and they also had painters tape supporting them. The base and the sides were spray painted with black spray paint. The inside of the costume is made of red fabric glued to the sides and base which is stuffed with newspaper. I had two rope handles coming from each side that went in to the inside for my hands to hold while I walked.

The bottom portion of the coffin was closed to give the illusion that my whole body was in the costume. My feet stuck out the bottom of the coffin. I painted my whole face and hands with gray makeup then I put fake blood coming from my mouth, nose, eye and I also had a slash coming from my neck with blood and a stitch on my face with blood coming from it. I was a complete hit that night, the only problem with the costume was that it was hard to walk in but it all goes smooth if you just shuffle. Hope you like it like everyone else did.