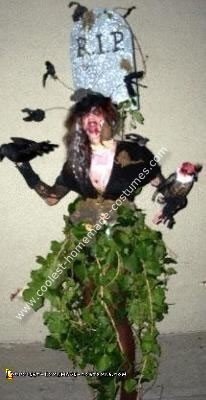 I live for HALLOWEEN and I am OBSESSED with OVER the top, LITERALLY costumes, and the fun that comes with it. I always enjoy props on wire, and the more, the BETTER!!! I wanted to create a walking scene and what is spookier than a cemetery and a corpse busting out? Surprisingly I was able to walk the streets and clubs with ease and that was a surprising plus, YAY!

I made the burial ground and foliage by using a Christmas wreath ( .99 cents store) around my waist, this acted as a stabilizing belt and I added craft wire. I weaved real, living ivy, branches, and dead weeds (I let the weeds dry in sun for a day or so) throughout the wreath and used wire to stabilize each branch. I picked more rounded branches to act like a corset for more fluff, I cut them from growing over fences for curve factor – my neighbors probably thought I was nuts, lol.

I cut material to go around my waist to make into the dirt I am busting out of. I then applied spray glue to it and then sprinkled and stepped on real dirt and moss all around it, and more leaves, and glued some leaves and moss to my dress, and then adhered the material around my waist with safety pins and hot glue gun.

The crows and vulture are craft store finds, they did not have enough crows, so I had left over wedding doves, and spray painted them black, I spread their wings and made them mid flight on craft wire, I spray painted the wires black for night time too. I stuck holes in their chests for the wire to stay. I used a head band on my head to attach the birds and wires and they stayed pretty firm after I wrapped them around the band, and just placed my hat over them with about 28 bobby pins!

I wrapped wire around my wrist to keep the birds on my wrist stabilized. I have scratches to prove it from the wire, ouch. My tombstone was Styrofoam, so I hammered wooden dowels into them and glued them, then added dried out weeds, rats and moss-using a glue gun (my best friend.) I slid the dowels(with tombstone attached) into back of my dress, and it stayed (more scratches to prove it, heehee).

I bought rats and spiders from .99 cent store and plastic roses (you can’t see in pic, but for flowers left at grave site and wired them in.) I wore brown tights as dirt, spray painted thrift store shoes with dirt, moss and leaves, found thrift store hat and dress (it did not have sleeves, so cut legs of pantyhose off, as my sleeves and tore them up.)

I glued rats to my hat, dress, skin, and tombstone, I adhered the rat to my face by first gluing it to a latex (more stable) and then, like the spiders crawling out of my mouth, I used sprit gum, and they stayed, and glued them (spiders and moss) to my chest too (ouch.) I used eyeliner to to brown out my teeth, and regular makeup to look like death, I had a left over grey wig from another year, and cut strands and bobby pinned them to my hair, and teased my hair to be a ratty mess. You can’t see in pics but I had a candle in front of me (like they do at graves) but I used those window Christmas lights battery operated and glued moss to it, it looked sooo spooky in the darkness, simple effect set the ominous mood.

I was a THE hit through the streets of Hollywood, which is a tough task in the land of movies, everything stayed in place, through thousands of people, and endless pics and even 2 clubs. There are leaves dropped through out the streets, THE only casualty ASIDE FROM ME… the corpse. Evil laughter Evil laughter. Thanks for checking out my favorite thing to do… dres!s and spend days getting ready for Halloween! 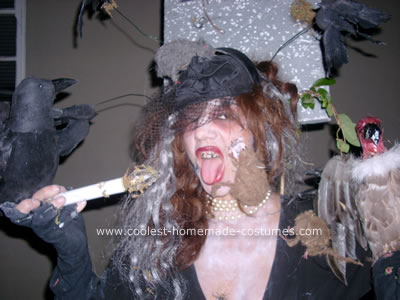 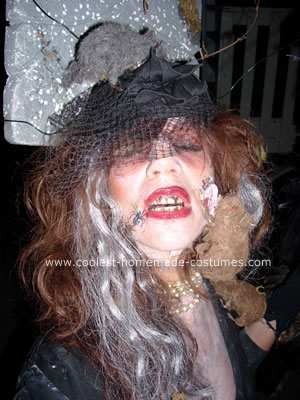