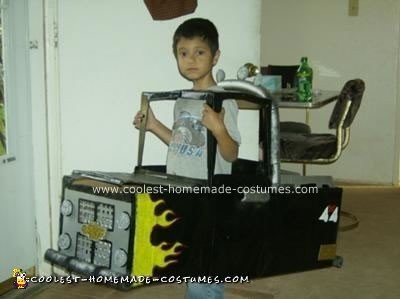 I offered to make my godson Jordan’s Halloween costume this year. I called up my cousin and asked if she would like me to help her out this year by making his costume and she said that would be fine with her. I asked her for suggestions or to ask him what he would like to dress up as, not sure if he had anything in mind as he is only 5.

The next day I receive a text from my cousin that Jordan wanted a Homemade Chevarado Truck Costume for Halloween. Well to be more accurate, my godson calls it a “Chevarado”. My brain immediately began to smoke as the little wheels in my head spun wildly trying to envision what it would take to put together such a costume. I was assuming, or hoping rather that he would have said he wanted to be Spiderman or GI Joe or something I could SEW, but a TRUCK? How do you make a lil kid a “truck suit”?

Well, never underestimate the power of a determined Nina!!

1. I assembled three cardboard boxes taped together to form the hood, the cab and the bed of the truck. Then I cut out the windows (windshield, side and back windows).

2. I cut out the grill and made holes for headlights by hand with an xacto knife.

3. I bought one can of black glossy spray paint and went to town spray painting the boxes, only to discover 1. you need a primer of some sort and 2. one can is not enough when you don’t use primer. I was most disappointed with the result and began to brainstorm how to fix this.

4. I covered the contraption in newspaper, coated it with a clear sealer to keep the paper and cardboard from sucking up the paint. Now…you might point out that I could have just bought black wrapping paper and accomplished the same thing. And you would be right.

5. A friend painted on some detail work like “4×4″ on the back fenders and the word CHEVROLET on the tailgate and yellow flames on the front fenders. I outlined the flames in glue and coated with red glitter.

6. I painted the grill silver and added some black detailing. I used Styrofoam craft balls to make the headlights by cutting them in half, coating in glue and then dipping in silver glitter. The tail lights were made the same only I used red glitter. I cut out a couple of small rectangles coated in glue and dipped in gold glitter for blinkers.

7. The bumpers were made from foam pipe insulation that you can get at a hardware store really cheap. Spray painted them silver. I used them for the front and back bumper and also to make a roll bar. a couple more Styrofoam balls cut and dipped in glitter made for the lights on top of the roll bar over the cab. The bumpers and the roll bar were attached with black yarn.

8. I cut out of cardboard the rails and painted them silver and then glued them in along the bed.

9. I spray painted a shoe box silver and glued it into the bed of the truck for a tool box.

10. I painted a small rectangle of cardboard yellow and painted it to look like our state license plate and made it into a personalized vanity plate for my godson.

11. I took the cardboard roll from a roll of toilet paper and spray painted it silver to make a tail pipe which I just duct taped underneath the truck bed.

12. I cut the front of the grill and along the edge of the top of the hood to create a flap for the hood so the engine compartment will serve as the receptacle for his candy.

13. I took a remnant of the foam pipe insulation cut the tube in half and glued them to the doors for handles.