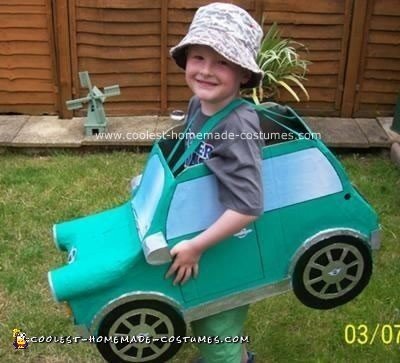 We decided to make our son a homemade car costume for his schools fancy dress competition as he loves cars and wouldn’t really want to be anything else, he won first prize so we were really pleased.

We started off using an old vacuum cleaner box, we opened it up and drew a car shape on one side cut it out and used that as a template to make another car shape, we then taped the two sides together with cardboard in the middle to make the boot and bonnet. Then taped two Pringle tubs on either side to make the lights and used paper mache to bulk if out a bit, it was then spray painted green and the wheels were painted black.

Next we stuck on extra bits of cardboard in the shape of back-lights and used extra card to stick on, as the bumper side trims and wheel arches were spray painted silver. For the wheel trims we used foil pie plates as the pattern was ideal when cut out. We printed the car badges, number plates, learner stickers and windows off the internet onto sticky back paper.

To make the wing mirrors we used a bit of wood going through the inside of the car and made the wing mirror shape out of card and screwed it onto the wood we then stuck foil on the end for the mirrors. The exhaust was made out of used toilet roll covered in foil and we stuck an old matches box underneath the rear of the car with a hole in and threaded the exhaust through this. The doors etc. were drawn on with marker pen. We used green webbing to make the straps and then the homemade car costume was done. 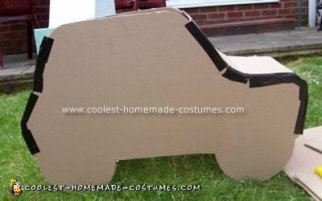 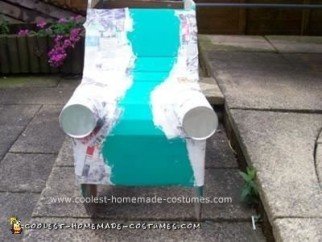 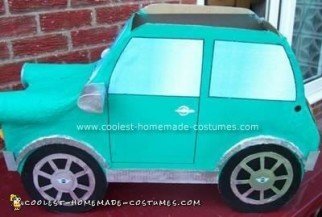