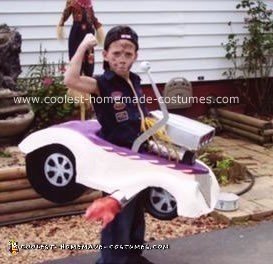 We came up with the idea for this costume because of our love for old cars and hot rods. We also wanted to give the cardboard box costumes a run for their money !

I started by using a fiberglass stroller body to mold paper mache over the top, for my 3D body. Once it dried , I cut it in half and molded it back to fit closer to my sons waist. We used a pair of suspenders clamped to the car body and then a shirt could be put on over them so they would be hidden and he could walk freely around.

Next we wanted an outrageous, over the top big engine sticking out of the hood. Out of cardboard I made the blower setup and covered it with heating and air duct work tape. I used a fishing line spool for the blower belt pulley and a piece of camper top foam tape for the blower belt. I used a old set of spark plug wires for the real plug wires and connecting them to a spray gun resivor that I had drilled holes in, then hot glued them so they would not come loose. We used a old piece of rubber hose to make a fuel line.

Next we needed tires and wheels. I found some wheel pictures on the internet that we liked. Then we blew them up to the size we needed and then laminated them for that glossy look. The narrow front tires were made from Styrofoam wreath circles from a florist shop. The big fat rear tires were made from foamboard sides and poster board for the tread part. They were put together with hot glue and installed the wheels to the tires. The white letters were cut out of vinyl from sign shop.

Next we needed some huge exhaust pipes coming out the side. They were made out of cardboard tubes with a set of real header collector gaskets, then covered with heat/air tape for the chrome look. The hot flames were made from poly fiber fill batting with a touch of orange, red, yellow spray paint. The oversize shifter was cut out wood paneling and cover with heat/ac tape with antenna topper for the shifter knob.

Next I painted the body off white and the taped up the stripe for the upper half in purple with a orange pinstripe to break up the two colors. Then used automotive pinstriping tape for the grille.

As far as the driver, he wore a mechanic looking shirt with a hot rod hat and topped off with some grease and a tattoo. We also made him cartoon looking sign that he could hold that read “ Will Race For Candy” on it. The whole car did not weigh very much, so it was easy for him to walk around hands free and also balanced well.

After that Halloween, the next summer he wore it at a car show and met Dennis Gage from the television show “My Classic Car”. Dennis autographed the car and had a small shot of the costume on the TV show when that car show coverage aired on Speed channel. Also had a picture of the costume and a interview in our local newspaper the next day.

We had so much fun with this Hot Rod!

Thank you for the opportunity to tell you about our costume. 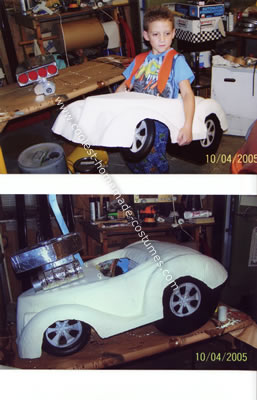