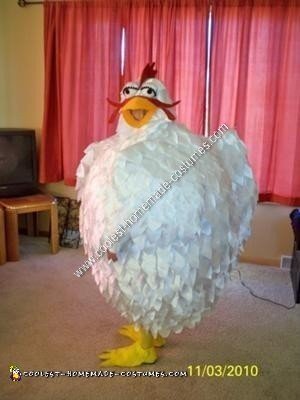 This homemade Camilla the Chicken from the Muppets Halloween costume idea came about from my kids deciding to be different muppets for Halloween. I like to make their costumes and my 11 yr old oldest son wanted to dress up again this year – I had feared he would think himself too old to dress up. When he agreed to be Animal and my 2 other sons agreed to be Beaker and Dr Bunsen I knew that my husband and I had to be Gonzo and Camilla.

I started with flexible plastic tubing from the hardware store in different shaped horizontal rings to make the round shape. I used tons of duct tape to get the rings to be the correct proportioned length apart from each other. I then figured out where the arm holes should be and marked that area. I covered all the rings then with 2 layers of quilting batting and then sewed a covering for the entire thing with a heavy vinyl fabric.

Now that my basic shape was made, I decided that I needed to have some shape resembling a tail. I cut pieces of cardboard and after much trial and error, came up with a piece of triangular-shaped cardboard that I could hot-glue to the vinyl in the back.

Now I was ready to figure out what to use for feathers. My initial thought was to buy several feather boas and attach them to the frame. the boas turned out to be very expensive considering I would need several of them. So instead I decided that a fabric that would fray might work. I decided on a white (cheap) satin. I cut the fabric into long 4-5 inch strips and then cut triangular shapes into them but still leaving them connected, kind of like a paper doll chain.

After I had MANY of these long strips of “feathers” cut I started to hot glue them to the frame starting at the bottom and applying them similar to “shingles” on a house. By overlapping them as I went up it created a nice feathered layering effect.

Now for the wings and head. The wings are made from cardboard cut to the appropriate shape and “feathered” the same as the body with elastic hot-glued to the inside that I could slip my arm into. The head started with an old baseball cap with white satin fabric draped over the top and sides and back. then I used orange craft foam for the beak – the bill of the cap was the perfect form for the top beak.

The red comb is also craft foam hot-glued on. More “feathers” on the head fabric cap and then eyeballs made from an old tennis ball cut in half and covered with white fabric with black craft foam for eyelashes and pupils.

The yellow legs are tights that I found online for 2.99. and the feet are yellow felt that I glued to shoes.

This homemade Camilla the Chicken from the Muppets Halloween costume was fun to make and I am really proud of the way it turned out.