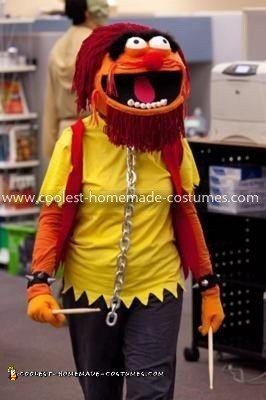 After a disappointing firefly costume attempt last year, I really wanted to go with something more challenging. I absolutely love the Muppets and knew that if I was going to be anyone, it would have to be Animal.

For the Animal Muppets Costume I started with a giant mixing bowl and made two giant halves of the head out of papier-mache. Each took two layers, so I had to wait a couple of days between each session for them to dry. Once they were done, I duct taped them together from the inside so that the “mouth” was open. There was some extra lip hanging off the back that I had to cut off. I used masking tape to secure the outside and all the little edges left over from scraggly strips of newspaper from papier-macheing.

Once that was secure, I drew where the eyes would go, cut a large hole for my head, and added some triangles of cardboard at the corners of the mouth so it looked more natural. Then I took 9×12 pieces of orange felt and hot glued them to the outside. When the head was entirely covered, I cut a piece of cardboard for the bottom of the inside of the mouth and covered it with black fabric and added a pink tongue. I hot glued two pieces of flower wire to the bottom of the mouth for better stability and secured it to the inside of the mask with duct tape and more glue.

Once that was done, I glued some sheer black fabric to the bottom of the inside of the mouth and stretched it taut to the roof of the mouth. I had to make it much tighter than I originally realized and ended up putting a stitch through the mask so it wouldn’t slouch down and I could see very well.

After that, I took teeth made from Crayola modeling foam and glued those to the mouth, then glued the eyes (also foam, but hollow underneath), nose (old felt stuffed with fake Christmas snow), and eyebrows (mini craft feather boa) to the head. For the beard, I took a piece of cardboard and tied pieces of yarn around it and sewed felt around the whole thing to disguise the knots and cardboard.

For the hair, I knotted pieces of yarn together 8-10 strands at a time, glued them with the knots facing the back of the head, then “combed” them over when I was done with my fingers.

For the wristbands, I made spikes out of more modeling foam, painted them silver over the course of several days, and because they were still sticky, sealed them with a coat of clear nail polish. The bands are just cardboard, felt and velcro. Although the collar spikes stayed on just fine, the wrist ones kept popping off. I had to put sewing pins through the bottom and then they stayed on. The chain is a fake plastic one from a Halloween store and I affixed that with more floral wire.

I bought orange tights and an orange shirt for Animal’s skin, but I looked everywhere for orange gloves and couldn’t find any. I ended up taking some old fleece and sewing them by hand myself. The pants were dyed pajama bottoms I cut up and the vest was made with the same felt I used for the nose. I bought a yellow shirt from a craft store and cut it up, then topped it all off with some green Chucks and drumsticks! I loved making this costume as much as I loved wearing it, and I won best costume at my work! Woo hoo! 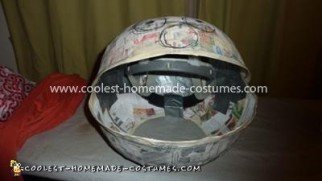 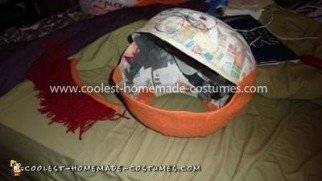 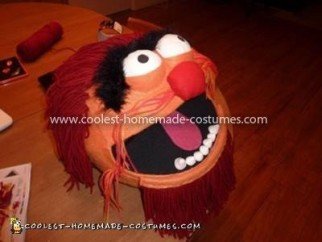