Every year in Madison, WI, we have a huge Halloween party downtown. The costumes can be pretty outrageous so I decided this year I would go all out. I was a huge fan of the Muppets growing up so this year I decided to on a homemade Beaker Halloween costume idea. I couldn’t find a costume online so I decided to make my own.

For Beaker’s head I looked everywhere for something Beaker-appropriate and finally ended up at Farm and Fleet. I bought a large concrete forming tube. It had some black letters on the outside so I bought some white acrylic paint and went over the surface with two-three coats. I went to the fabric store and got some Styrofoam balls, a Styrofoam egg shape, red mesh, two different types of orange boas, and pink and orange felt.

(1) I measured the tube’s length and circumference and sewed a large pink tube to slide over the top of the concrete tube.

(2) Afterwords I cut out the shape of Beaker’s mouth.

(3) I stretched the felt so it would go around the opening and super-glued it on the inside.

(4) I super-glued pink fabric to the inside of his mouth as well.

(5) I used the orange felt to cover the Styrofoam egg shape, I had to cut out triangle pieces and stretch the felt a fair amount to get it to cover it without wrinkles.

(7) After that I got the Styrofoam balls out and used a permanent market to create pupils.

(8) I carefully arranged the eyes and nose on the pink felt of Beaker’s head and super-glued them in place. The next step of my Beaker head was to superglue the two boas onto his head and make his tall hair.

(9) I cut slits all around the top of the concrete tube and folded them in to give me a brim to glue the hair on.

(10) I used a smoother fuzzier boa to put around the edge of his head and used a larger feather boa for the top of his head to give the height.

(11) I had a some extra pink felt so I ended up making “Muppet” gloves for my costume (4 fingers), I traced my hands with the pointer and middle finger together and used a sewing machine to sew a little outside of the outlines.

(12) The last thing I did was cut arch-shaped armholes at the bottom of the head to put over my shoulders. These ended up being about 8 inches tall and did a good job of anchoring his head on my body.

(13) I glued some sponges onto the edges of the cardboard tube for padding.

After all of this work I went to Goodwill and searched for a green tie, some tweed pants, a green and white plaid button up shirt, a lab coat, and some saddle shoes. I couldn’t find the shoes or lab coat so I went to a Halloween store and bought a lab coat from them. I ended up just wearing my Converse All-Stars for his shoes with some tall socks. Be sure to get tweed pants that stop just above the ankle. Beaker is too cool for pants that fit.

It was tough getting the button up, the tie and the lab coat to fit around the tube but if I left the top 3 buttons unbuttoned – it worked just fine.

WARNING: People love Beaker and cannot control themselves around him. You will get people running up to you and opening and closing your Beaker mouth. It can get irritating after the first 15 times.

A few other ideas that I thought of:

– Create a pouch on the top of his head to hold your wallet, keys, etc.
– Bring a crazy straw if you decide you’d like to drink. It helps IMMENSELY.
– Bring a plastic/glass beaker to put your drink in.
– Have your friends dress up as other Muppets!! 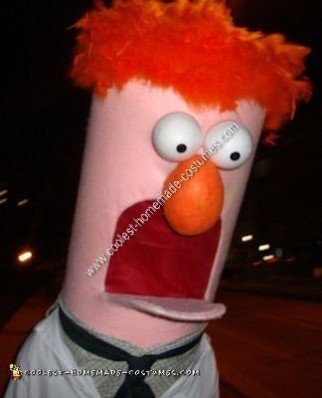 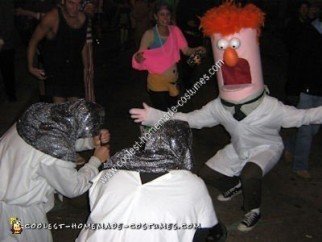 Coolest Do it Yourself Beaker Halloween Costume