Every year I try to outdo myself on Halloween costumes. I was ALF, Roger Rabbit, and Sloth from The Goonies previous years, so I wanted to make my own Do it Yourself Beaker Halloween Costume this year. Everyone loved the Muppets, and Beaker looked like the easiest. Making the head was the most work out of the costume.

It took me, combining the hours throughout the week, about a day to make the head. For the head, I used a white poster board, measured it around my head, and then super glued it together. I laid pink fabric around the head, which is his actual color. I used Styrofoam balls for the eyes, and a Styrofoam cone for the nose. I just shaved the cone down so it wasn’t so pointy. I covered the nose with orange fabric with a rubber band holding it on, and also used sleeves from a white t-shirt for the eyeballs. The eyes were done with a black sharpie. Holes were put into the head for everything to hold. I cut the end of two plastic forks and stuck them in the eyes to hold up. The nose had a hole made for it in the head. I sliced a mouth hole to drink and see out of. I used 5 sheets of red mesh to make it look like his mouth was open. It worked very well. The hair was the hard part to find. Beaker had orange hair, not red. I could not find any orange boas, but I found a Disney’s Little Princess Dress turned it upside down, and there was his crazy hair. I had a piece of cardboard cut to hold the hair up. I used a green tie/dress shirt. My pants were grayish khakis with my socks showing. Beaker had the red and white socks (try to get perfect for this costume). Another thing I wanted right was his shoes. He wears saddle shoes, which is a 1950s style of shoes, hard to find! After searching all thrift shops, I finally found some from a payless website. I found a lab coat from a store in town, there were pencils in my pocket, and my hands were stitched with extra pink fabric. They were actually made with four fingers like he has.

I got stopped everywhere on that night for a picture. I won the costume contest at one of our local bars. People were screaming for my name so loud! I would say it was a great success for actually making a costume this year. 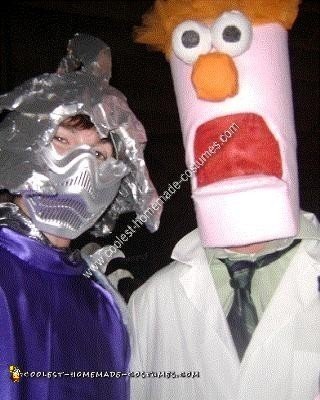 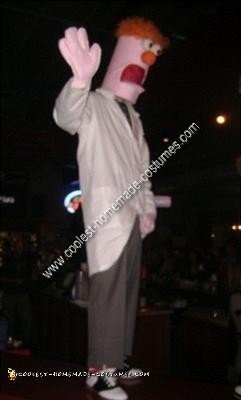