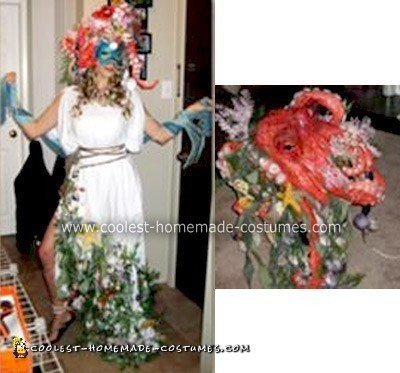 I love dressing up for Halloween and have never ever bought a costume in my life, and never will! I take on each new costume as an art project, and pride myself on being original. I don’t have a lot of money either, and this entire Homemade Amphitrite Greek Goddess Costume cost me under $100. Inspiration came for this costume when I wanted to do something with the sea, but not a typical mermaid. My favorite animal is the octopus, and came up with the idea of Amphitrite after wanting to construct an octopus headdress. She is 1 of the 50 nereids from Greek mythology, and is in charge of keeping sea life. She’s married to Posiedon, making her a queen of the sea.

I collected, cleaned, and lacquered the seashells, and glued them to a bed sheet that I halved and minimally sewed together leaving arm holes. I used Goop glue, which held very well. I bought plastic plants at the dollar store for seaweed, and a few I painted pink for coral. The cloth seaweed I cut from leftover sheet material, and dyed light and dark green. I wanted the seaweed and such to look like it was climbing up my dress, as if I rose out of the sea, and was one with it. The waist rope, and shoe rope is made from yarn that I braided together.

The starfish and crab are made from clay and paper pulp plaster, and painted. The wig I bought on eBay for under $30 after shipping! The octopus I constructed entirely out of papier mache. I made the suckers out of clay, then had to paint them with white nail polish after the resin coating on the octopus turned them too dark. The resin gave the octopus a wet look, as well as made it hard and more durable so that the suckers wouldn’t all fall off.

I warped a wire clothes hanger into a circle fit to my head, and also had the wire go up and across my head to the other end of the circle- like a headband. This was glued under/into the octopus and created stability so the headdress wouldn’t slip off my head. Since I had a wire running across my forehead, I needed a mask.

I created a plaster cast of my face so I could bake polymer clay on it in the oven (the cast was to hold the clay in shape while it baked). I made all the beads on the headdress and mask with polymer clay, then painted them with pearl coloured nail polish and then strung them along with more seaweed and shells all over the octopus, and hanging from the wire base. I also made the necklace out of seashells and painted beads, and strung 2 pearl necklaces I had to the arm and to the bottom of the dress. I pinned string to the side-train of my dress so that I could pick it up and walk. For a fish net, I used a scarf I had. I smeared glitter onto my skin as a finishing touch.

Everyone seemed to really enjoy the Homemade Amphitrite Greek Goddess Costume, which was my goal. All I did was walk around downtown getting pictures with people.