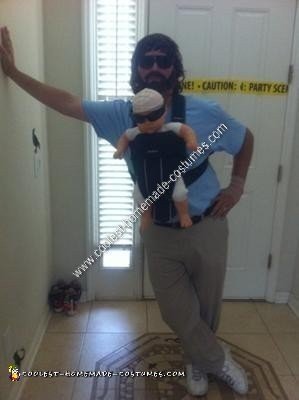 So ,I got the Homemade Alan and Carlos from the Hangover Unique Halloween Costume Idea from watching the Movie “The Hangover”. I went online and researched some movie photos. I searched about 20 stores for various parts (mustache, beard, baby carrier, etc.). As I was trying it on for the first party, I couldn’t stop laughing looking in the mirror.

The first party was at our house and people were having fun with “Carlos”. The following weekend I decided to hit the bar with it, since they were having a costume party. As I walked in the door, people recognized the character instantly. Everyone was clapping and cheering. The band grabbed me and started shooting pics. All night long people were taking pictures and saying how awesome the costume was. The lead singer of the band pulled me up on stage and we were headbanging to a song . “Carlos” was an amazing headbanger, the whole bar went nuts!

I only wish I had taken the costume to more parties, what a blast! I already have some ideas for next year!

Coolest Alan from The Hangover