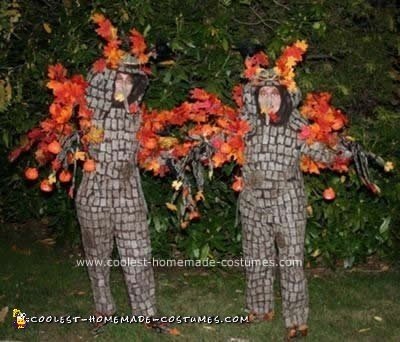 We made these Halloween Tree costumes almost completely from scratch. We started by making the bark. We painted sheets of brown craft foam with brown textured paint to get the rough bark look. We then cut up the shapes into oddly shaped bark-like pieces. We glued these pieces onto brown shirts and pants, completely covering them.

For the branches, we made a wire frame for each one, and covered it by wrapping it with strips of brown felt. We also painted this felt with textured paint so that it would match. We then glued synthetic leaves in bright fall colors all over the branches. We purchased small trick or treat pumpkins and cut out the black faces, so that they were holes instead of printed faces. They had handles, which we took off, and we covered them with circles we cut out of orange craft foam. Inside of each one, we inserted a battery operated tea-light. We glued brown pipe cleaners to the top of each pumpkin for the stems, and attached them to the branches with wire.

Our head-pieces were sewn from brown felt, and covered with more bark pieces. We attached a bird’s nest on the very top, and glued a large black crow and eggs made of model magic inside. We also added more leaves around it. We used a long plastic nose for the twig coming out of our faces, which we painted with the same paint, and attached leaves to. We completed the look by painting our faces brown with acorn shaped eyebrows and lines to look like wood.

When it was finished, the pumpkins glowed in the night, and cast an eerie glow, just like the Halloween Tree from the story.