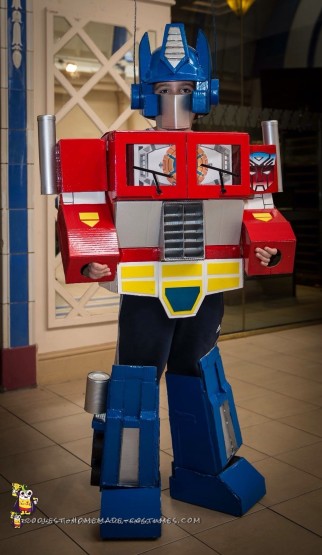 This Optimus Prime costume was made for my son to go to MCM Comic Con Scotland in 2014.

The reaction at the Comic Cons is of that of amazement, My son has won a couple of prizes doing cosplay. People always stop to ask to get photos. It’s great to watch everyone’s face when they see the costume. He has been asked to help open a toy shop along side the real Optimus Prime truck. We were asked to do it when we were at a Comic Con in England.

Noah even got the man that plays several of the transformers’ voices in the films to sign and speak to him about his costume. We have taken it to 4 Comic Cons now and have drawn a lot of attention all over the country. His photo has appeared on lots of web sites and Facebook pages. We will continue to show it off as long as he can fit inside it.

The next plan is to try and fit electrics and also the voice of Peter Cullan who plays Optimus Prime’s voice in the cartoons and the films, AUTOBOTS,TRANSFORM AND ROLL OUT! 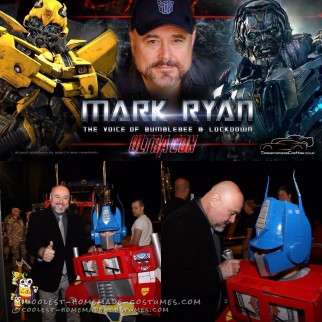