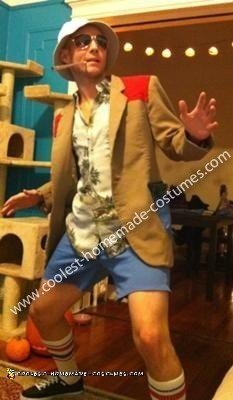 After reading several Hunter S. Thompson books over the summer, I became a huge fan of not only his gonzo style of writing, but also his characters that are loose portrayals of himself. I decided this Halloween I would be Raoul Duke (aka Hunter S. Thompson) from Fear and Loathing in Las Vegas. I found the hat and glasses I needed in Chinatown for about $10 then headed to the Goodwill for the rest of the outfit. The shorts are a pair of scrubs I got for $2 that I cut and hemmed. The sport coat I found at a thrift shop along with a few multicolored T-shirts to cut up and sew on as patches to match the jacket Johnny Depp wears in the movie.

My girlfriend helped me with a lot of the sewing since I have no idea what I’m doing with the sewing machine. So after a few hours of cutting, sewing and practicing my favorite lines in the movie, I’m ready for a Halloween full of ether trips in bat country.