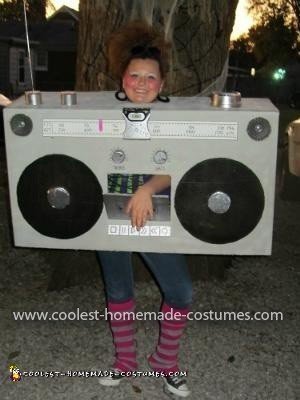 This story starts with my wife and I in the past buying costumes then deciding to make costumes. The materials used for this particular costume are cardboard, foam, metal screen, spray adhesive, spray can tops, Velcro, Reynolds wrap, gray and silver spray paint, glue gun, antenna, 9 volt battery and a dissembled CD player.

This Homemade Boom Box Costume started with me taking apart an old portable radio, I used the speakers, the digital radio, and the antenna. After the radio I measured my daughter’s shoulder height, width of her shoulders and the depth of her chest to make sure it was fit to her. It was a little uncomfortable for her so I took foam and made shoulder pads and glued them under the top with spray adhesive.

I measured the cardboard with the measurements taken and started gluing it together, the top has a horseshoe shape cut out and in the back of the costume there is a door for her to enter and it is latched with Velcro. Then I took a pizza pan to trace the big black speakers. I painted the box gray. I took a 3 foot ruler and traced it to make the tuner, then with a black permanent marker I wrote out the numbers on a long piece of paper and glued it on.

Next I sprayed the spray can tops silver for the knobs. I put the big black speakers on with hot glue. Then I took and cut out circles of cardboard and put Reynolds wrap around them to make them chrome, and put them in the center of the black speakers. I cut the top corner circles out for the real speakers and put metal screen in there to protect them.

Then I cut the center out for the actual digital stereo. I wired it all up with the wires, speakers, antenna and the battery. I cut the circles out for where the spray can tops go and glued them on with hot glue. Then I cut the cassette deck where it would open. Then after all of this I just detailed everything with a permanent marker. 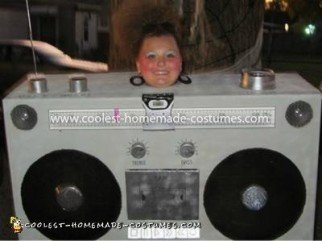 Coolest Sexy iPod Costumes for a Night Out at the University