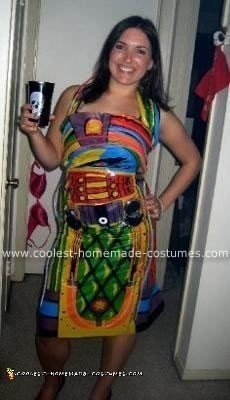 I got my inspiration from the “You can’t handle me” video by Robyn. In the video, she has a jukebox-type outfit on, so I thought it would be really cool to make a jukebox dress that would be cute because it’s a dress, but also take it up a notch and make it functional by hooking up my ipod to mini speakers and adding on light of some type.

First I had to decide what the dress should be made of, but I knew it would consist of a dress, my ipod, ipod speakers, and glow sticks. Originally, I was thinking of buying a black tube dress of some type and painting it. Trying to be economical, I couldn’t really find a dress that was to my standards for a low price, plus I would have had to buy paint as well and ruin the dress.

Instead, I googled inflatable jukebox and shopped around. The one I finally got came in at just under $20 (including S&H). I also found ipod speakers for about $7 on sale at Marshall’s. I bought a bunch of glow stick packs at the dollar store, in the form of necklaces and bracelets and all different colors. I wasn’t sure exactly how they would work on the costume since I hadn’t bought the dress yet, but I figured I’d need some fairly long ones for the sides (necklaces), and some shorter ones for the top and to wear as a bracelet.

For the speakers, they were sort of egg shaped and larger than I’d like, so I took a chance and cracked it open. Luckily, I was right, the egg shape part of it was completely hollow and not needed. However, I couldn’t get it completely off of the wire, half the egg stayed on. I tried to shove something through the hole so it would break and come off, but it accidentally severed the wire on the left side and ended up not working. Therefore, I stopped fidgeting with it more and decided to make the 1/2 egg shape for the left and right speakers part of the costume.

When the inflatable jukebox came, I had to hold it up and figure out where I wanted to cut it and how to shape it to my body somewhat, while not losing the integrity of the jukebox-ness. So I decided to cut one side only so that it would only be one side I would have to fasted together when putting it on.

Originally, I was going to make it a tube dress, but it was very long so instead, I cut into the top and made it a halter dress so it came just below my knees to be more flattering. I cut a chunk off of the back and held it up. Then I had my roommate help me by pulling it tight in the back so we could figure out where to put the double sided Velcro squares along the open side to fasten it shut.

After I had the shape of my dress down and cut as much of the back black part off as I needed to, I figured out where to Velcro the ipod and speakers. I had to also use tape for a lot of the costume. Aside from Velcro, I used clear packaging tape to reinforce it and help the shape/prevent tearing. I also taped on the 1/2 egg speakers and taped the wire behind it to hide it.

In terms of the playlist for the ipod, I made a jukebox playlist packed with classic oldies. I of course played a few modern day songs as well, but mostly left it on oldies. Unfortunately you couldn’t hear the music at the party since we had a DJ, but people were impressed at work during the day, and at night, people were impressed with the glowingness and the creativity.

Last minute before the party, I cracked the glow sticks and taped them strategically onto my costume. They turned out looking pretty cool and I also had extras left over to hand out to people later.

All in all, it took some time to pull it together, but guaranteed there were no other functional jukeboxes in this country on Halloween this year!