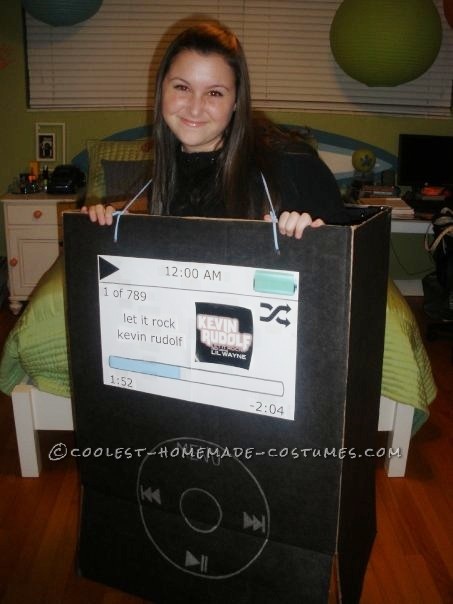 This Old-Fashioned iPod costume was so much fun to build and especially wear. It was definitely a crowd pleaser and I got so many compliments throughout the night. It also didn’t cost me much at all to make! (I used random supplies lying around my apartment.)

First, I took a medium sized box and painted three sides of it black with Jumbo sharpies  (I probably could have saved time by simply using spray paint, but I didn’t have any lying around the apartment so I stuck with sharpies). This took a while, but it worked out well in the end because the box didn’t warp from wet paint. I then glued aluminum foil to the back side of the box.

Now this is the fun part. After making the base, I began to personalize my iPod. I simply printed out an album cover along with some other common symbols found on an iPod. Then, using clear tape, I slowly pieced my screen together. I then used a silver sharpie to draw the buttons and a black sharpie to draw the apple symbol on the back of the iPod (the side with the aluminum foil).

I used string as straps to hold the costume up and simply wore all black. I also attached oversized headphones and carried around a wireless boom box playing the song I had chosen for my iPod screen  (this was fun for my entrance, but soon got a bit annoying to carry around.).

I definitely turned heads with this costume!! 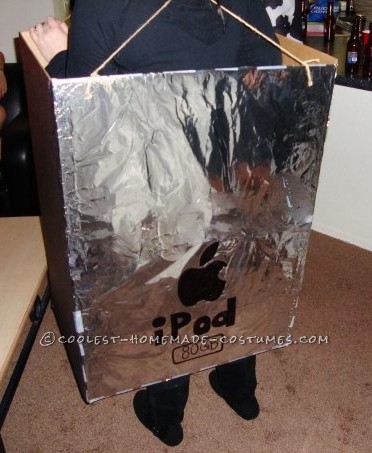 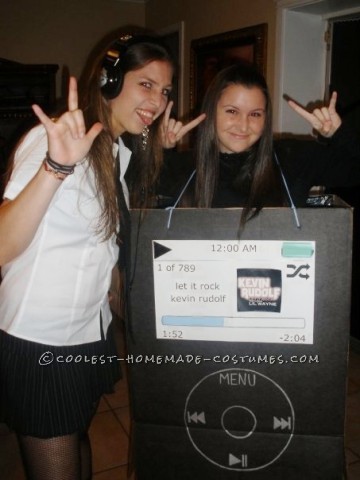