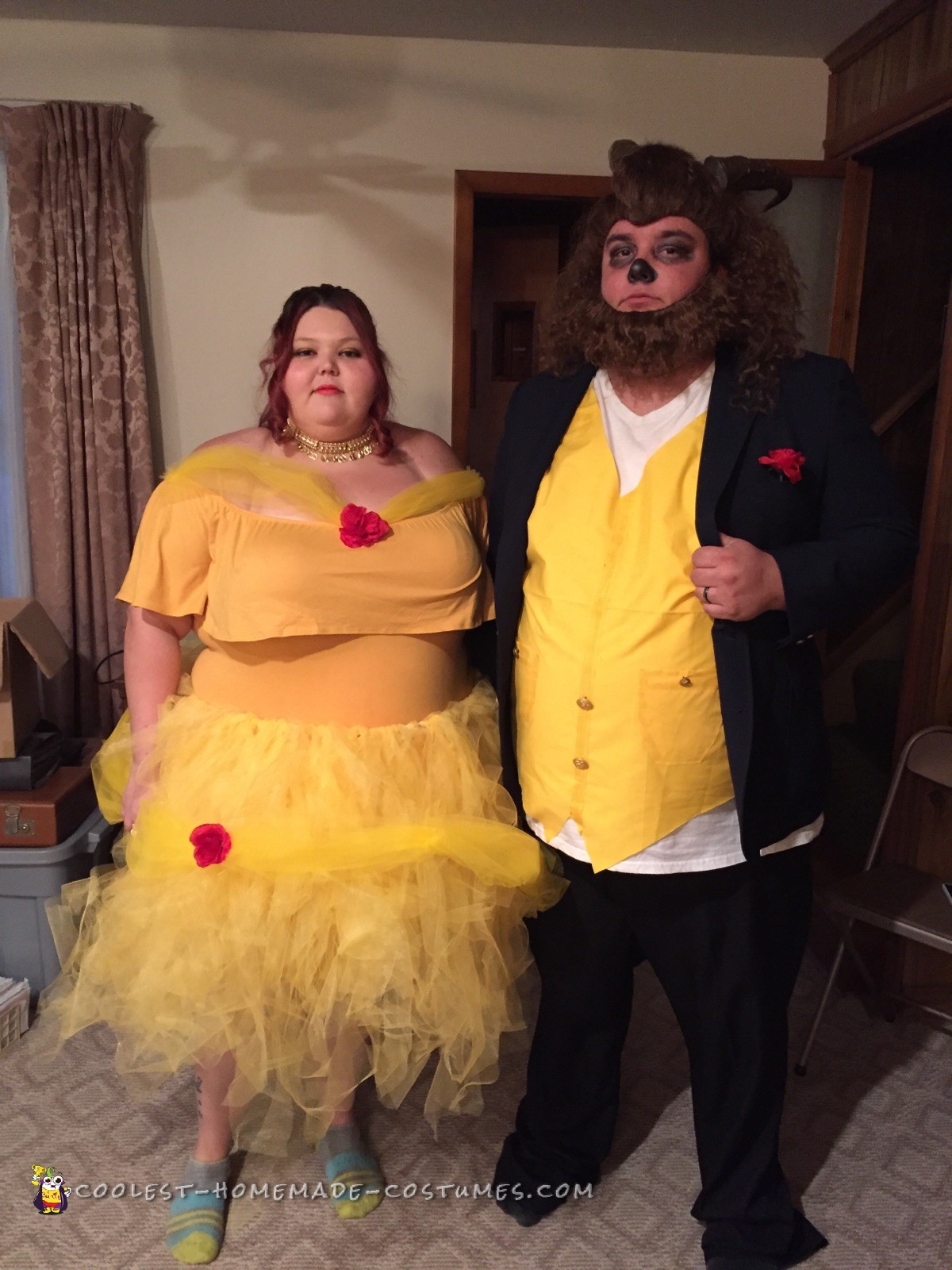 Let’s just start by saying that the reactions our Belle of the Ball and her Beast couple costume got was well worth the energy it took to put them together.

We were invited to attend a party around here called the witches ball, we had never been and have only known about it since someone we knew attended it last year. When I told my mom we were going she said, “well you know who your have to be Beauty and the Beast.” Now let me explain why that was the obvious choice.

I have loved beauty and the beast for as long as I can remember and she found it fitting since it was called a ball that we should go as this famous Disney couple. Of course I have worlds best husband and although he may not have been over the moon about this fantastic idea he was more than willing to do it for me!

When the day came to wear these awesome costumes I could tell he was more thrilled then I had imagined with the way it turned out! Pure excitement that we had pulled off a pretty epic costume!

Construction had its ups and downs, luckily more ups then downs.

We searched and searched for the perfect wig to pull off “The Beast”. Of course we found it on Amazon – you really can find anything on there! Then we started the search for a jacket which actually ended a lot quicker than I thought because the Goodwill had the perfect blue suit coat that was almost the right size. Nothing like a good pair of scissors couldn’t take care of. It cost just 3$!

He found the black pants at the bottom of the drawer where most of our dress pants go to hide and, yes, he tried to switch them out and just wear jeans instead – a few times. You see who won that one!

For the undershirt, we like our comfort so he took a white T-shirt and fabric glued some dashing yellow fabric to it in the form of a vest which he then detailed with pockets and golden buttons hand-sewed on by him. Yes, he sews! I know what you’re thinking – how did i get so lucky?

His horns have got to be my favorite part. He took plastic cups and wire to make a horn-like structure to which he then applied tin foil and then paper mached it. When it was dry he painted them and man did they look awesome. He then attached them to a headband. His design came out fantastic and I was proud to walk around with him all night!

Construction of a princess, as much as I wish I could sew a beautiful yellow dress, I had to purchase the base of mine but I got a really awesome deal if that counts for anything. I then added yellow tule and a rose to the top of my dress by sewing them on. That wasn’t my original plan but as i found myself awake and still working on my costume at 4 in the morning the only option was to go big or go home!

The tutu is made of about 20 yards of shimmering yellow tule and an elastic waist band. I underestimated how much tule it would take to make a tutu since this was my second one – the first one was constructed days before for my niece’s costume. So needless to say I had to run back out to a store to get it – the closest store being 25 mins away.

After I completed the tutu, I had another thought to add some brighter tule to the outside of the tutu to complete the draping effect on Belle’s dress. Fabric glue should make that an easy task. Wrong! Fabric glue doesn’t seem to work to well on that type of fabric so guess what? I found myself sewing yet again at 4 in the morning and then again go big or go home so you see how the roses made their debut on that dress as well!

The day of the event and Halloween I accessorized my costume with rose earrings, rose ring, a beautiful necklace from Walmart for the lovely cost of $3 and a comb in tiara which was actually from our wedding a few years ago. I knew I could find somewhere to wear that thing again!

During the process of making the costume and getting ready the day of we had quite a few good laughs especially the part where I walked in on my husband trying to do his own (make up). I’m still laughing at what he looked like when I went into the room – more like a dog and less like a beast, but being the awesome wife I was, I came to the rescue with some black eyeshadow. I will say that I have never put makeup on my husband before so that was interesting to say the least.

In the end the whole process was worth the pure joy we got wearing our costume. All night long people were coming up to us asking us to take pics with them or to take pics of us or just simply telling us how awesome we looked. We were standing outside waiting for a cab and a younger girl came up to us and told us she was getting married and her theme was Beauty and the Beast and she asked if she could take a pic with us to show her fiance. I was so thrilled that people enjoyed our costumes so much!

Our families loved them as well and of course so do I. I wouldn’t be surprised if my husband got home from work one day and I was prancing around as if I was a princess. I’m keeping that costume forever! 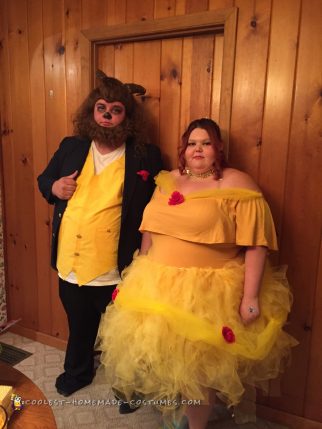 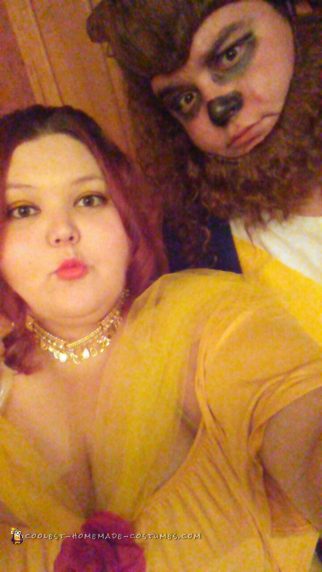 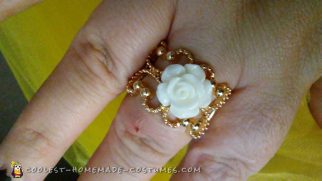 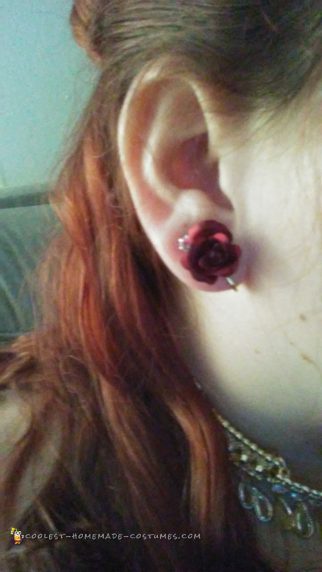 Beauty and the Beast with Baby Lumiere Family Costume

Amazing Lumiere Costume (and his Plumette) from Beauty and the Beast