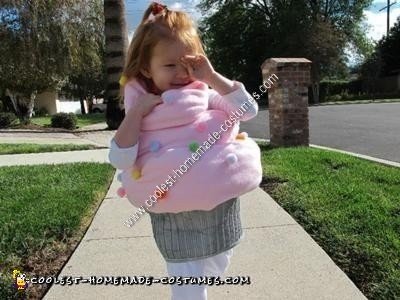 This bakers and cupcake Halloween costumes were inspired by the fact that we just found out we were expecting our second child. So I wanted to do something with a “bun in the oven” and make it into a whole family idea. That meant my daughter had to be a fully cooked bun (or cupcake!).

Our bakers Halloween costumes were just party store aprons and chef hats with wooden spoons as accessories. I found a picture online of an oven and drew a “muffin” inside. I used crayons and markers to color it and I put it inside a sheet protector and stapled it to the front of the apron.

My daughter’s cupcake costume was a bit more intricate. I took a small, old lampshade, spray-painted it silver and turned it upside-down. I attached two strips of terry cloth (front to back) as over-the-shoulder straps. Then I cut three strips of pink felt fabric each 14 inches wide. The first strip measured 12 inches longer than the circumference of the lampshade, second would be 5 inches shorter than the first, and the third 10 inches shorter than the first. I folded each one over into a “roll,” sewed it up on three sides and stuffed it with quilt batting. I hand-stitched the fourth side of each “roll”.

I put the lampshade on my daughter, then the longest roll, middle roll (both of these under her arms), and the third roll just around her neck. I sewed a sparkly pom-pom onto a green elastic (like a cherry on top) for her hair. 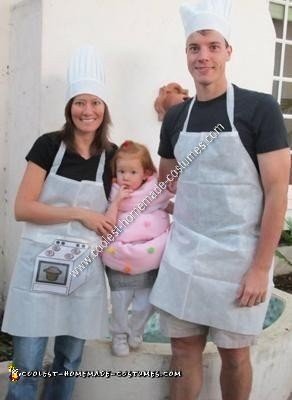