This Homemade Baby Popeye Costume was such an easy and cute costume to put together for my little Popeye.

The pants were made with some blue fabric I had on hand….initially cost 1.99/yard. I added a yellow belt using yellow binding that I had. The shirt was a black t-shirt that my son already had and just turned it inside out. I used some of the same blue fabric and sewed fabric for the cuffs on the sleeves. I used red felt for the collar…(got this at Joanns for .25 a square. Used 2 squares. I used another shirt collar as a pattern and just made it bigger. For the buttons I used yellow felt cut into circles and made 2 black dots on them. Then hot glued them on the black shirt.

The muscles. I found a pair of my old women’s light tan socks. I cut the toe part off them and just used the longer part. I also had to make them tighter so they would stay on my babies arms so I cute them lengths wise… cut out about an inch of the sock and sewed them back together. I then just put them on his arm and stuffed some stuffing in it. I then drew anchors with marker on the socks.

The hat was the hardest part. I couldn’t find a sailors hat online small enough to fit the head of my baby, so I found a white bonnet looking hat at Good will for 1.25 and transformed it into this hat also using a collar off a men’s white shirt that I also got at Goodwill. I just cut off the collar and sewed it onto the hat to create the look off a sailor hat.

The spinach can was an old baby formula can. I printed out the words ‘popeyes spinach.’ Covered the can with green paper and then the popeyes spinach label. Used green tissue paper to represent the spinach.

I have also made an Olive Oyl for myself… and my husband will go as Brutus. Pictures to come! 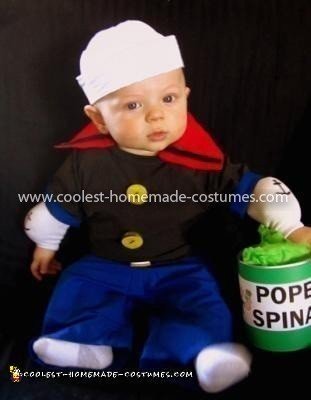