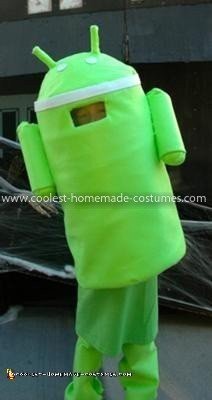 My 7 year old son was Pac-Man last year (thank you to this site for the ideas) and got rave reviews. Naturally he wanted another homemade costume this year. He is the Android character from the Android operating system. College kids and techies knew what he was but everyone else thought he was some sort of alien.

To make the head, I blew up a kid’s punching balloon so it was a little larger than the laundry basket. I used play doh for the antennae and taped it to the balloon. I then paper mached the balloon and antennae using homemade paper mache glue (flour and water). Just pop the balloon when it’s dried.

For the body, I cut the top out of the laundry hamper. I fit the paper mache head to the hamper and used scissors to cut out the rest of the balloon to form the dome head. I couldn’t figure out how my son could see out of the head portion so I just cut out a window on the Android’s body. There is green mesh over the cut out but you can’t tell from the picture. I covered the body in batting material. Then I glued the green felt and eyes using my trusty glue gun. I also cut out two arm holes. You might want to make sure they are at the same height before you cut. I considered making ‘sleeves’ with the tennis ball cans for my son’s arms but it was more work than I wanted to deal with. Plus it makes it hard to take off the costume. I shoved two tennis balls into the bottom of the Android’s arms to make it rounder but you can see it was an afterthought because the fabric is separated.

For his pants, I made two felt tubes to slide over his shorts and used sticky back Velcro to keep them on. However, the hamper was short by about 3 inches and you could see his shorts so I improvised with the green t-shirt. I should have made pants but I ran out of fabric and it was Halloween Day.

I also put packing foam/sponges inside the head so his eyes would be at the right level to see out of the Android. I think the light weight laundry hamper is the way to go. He could run in this costume but it was hard to see steps. 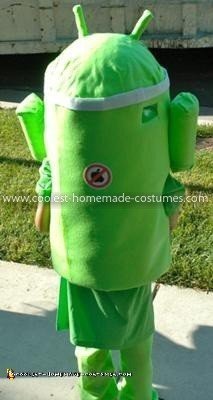