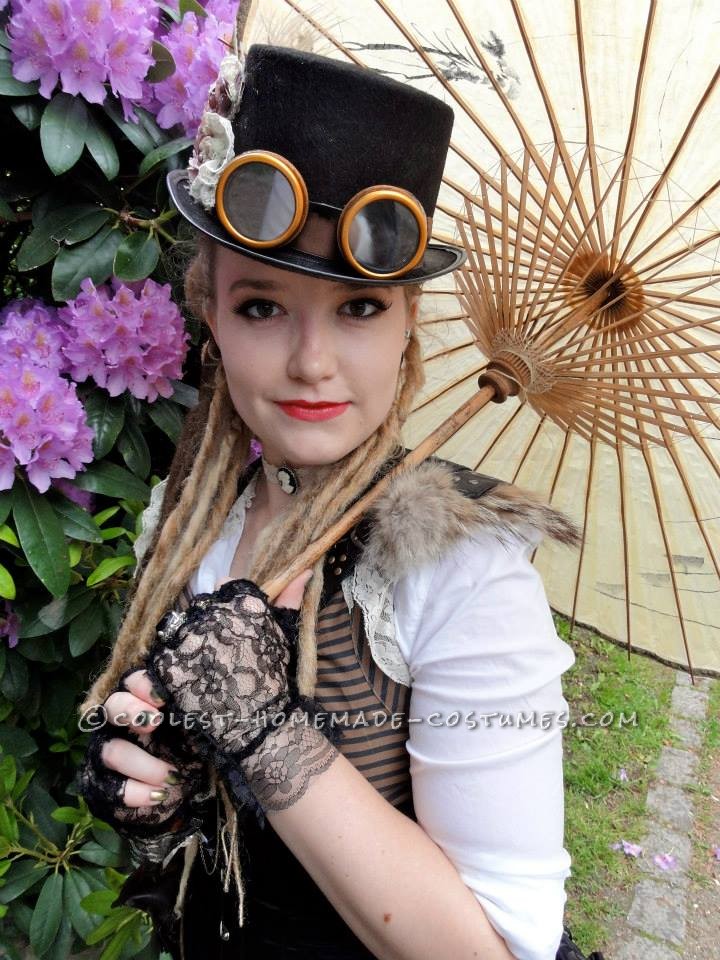 “Scarlett slammed the door shut behind them, quickly stacking available furniture against it.
“Well, that won’t do much good against bullets,” she said, holstering her gun, “but it might slow them down. And while we’re here, we should –“
The Lady Captain stopped when she saw her crewmember leaning against the table, Morgaine at her side. Blood. There was blood.
Scarlett’s stomach dropped.
Jett had been hit.
By the Seven Hells, she knew it had been a fool’s plan to begin with. A dangerous, life-threatening situation and she had plunged her crew into certain death. If not in narrow hallways with bullets flying, then by the hand of some darkhooded executioner at the Gallows.
She had known. And she had gambled with their lives anyway.
The familiar sour taste in her mouth returned. That’s the kind of person she was. Egoistic, self-centered.
But she was still their Captain. An impulsive Captain, a foolish Captain sometimes, yes, but their Captain none the less .
She had to make sure they made it out alive, by the Seven Hells, she swore they would make it, even if it would cost her own damn life.

She cut some of the last silk from her gown off with her knife and briskly grabbed Jett by the officer’s uniform.
“By the Lord Ruler, Jett! What have I told you about bullets? You bloody avoid them, you absolute moron!” she hissed, removing the jacket with curt, precise movements, “we’re in deep as of fifteen minutes ago when the damned Lord Ruler appeared and tried to kill us. I’m in my bloody stockings, Tax is gone and now you’re wounded.”
She stopped her rant and pointed at her forehead, glistering with sweat.
“And look at this. I’m sweating. Sweating! I’m a Captain, I don’t do sweat!””

And thus the good, albeit a bit impulsive and not-totally-thinking-things-through Lady Captain, going by the name of Lady Scarlett, is introduced.
She’s an old OC of mine, a character in my steampunk novel. As I started to make the costume, she got more and more personality; the dress is scorched at the bottom, from an explosion getting a little too close for the Captain’s liking. The flowers and ornaments on her top hat, she has robbed from the graceful ladies of the court. The dress itself was from her time as a young noblewoman, when she walked the marble floors of high society, playing the game of power and money.
She’s a pirate captain with love for anything expensive and chooses to run around in a heavy dress because she’s the best damn crackshot in the Eternal Skies and because she knows how to get out of a pinch even wearing a gown.

When I made the costume, I was fairly inexperienced. I had never made anything this complete or of this caliber, but I ended up making tons of details, sewing, glueing, scavenging for things I could use for my Scarlett. Nothing but the best was good enough for the Lady Captain.
I made the Maverick (repainted the Nerf gun) as well, gluing scopes on and installing a tiny LED-lamp at the front to light the way, should her enemies hide in the dark.
The dress itself was an old dress I repurposed, made an entirely new skirt in the style of 1850’s flowing Victorian dresses. I’ve always been fascinated by those enormous gowns and the tiny waists. I used silk for the skirt, made a flannel and blonde skirt underneath, showing her undergarments that way – daring in the Victorian times. I hooked the front of the skirt underneath the corset to make it easier to move around and show a little leg. A Captain should be able to move.
I made a leather pauldron, lined with coyote fur and as I had no sewing machine or thimble, I sowed it with an ordinary needle and thread (ouch, my fingers! My thumb was sore and red for three days!). I used leather from old boots I never used anymore, and the fur was from an old LARP costume I made years and years ago.

The belt is full of details as well: a holster for the Maverick named Kraken, a pouch of vials with poisons, old keys and a fan. In the front, a wrench has been secured to the belt, because engine 3 is an old model and often needs the loving hands of a skilled mechanic…

I absolutely loved making this costume. When I finished I almost felt sad. I worked on it on/off for a half year, perfecting it, creating the arrogant and daring Captain behind it. With the slim budget of a student living by herself, I piece by piece brought it together. When I finally got the synthetic dreads installed and put on the five skirts underneath, slipped on the dress, the underbust and the belt, when I tied the red scarf under the tophat and finally placed the hat on top of my head, I became Scarlett of the Ark.

I had the best night in my life, going to the annual pirate party in Copenhagen, Denmark. I won the first price for best female costume. And best of all: I met a guy whom I fell madly in love with. Now we’re dating, and Scarlett gets to come out from time to time, making the skies and the docks of Denmark unsafe. She’s my bossy, arrogant-yet-charming self. She’s my alter-ego. 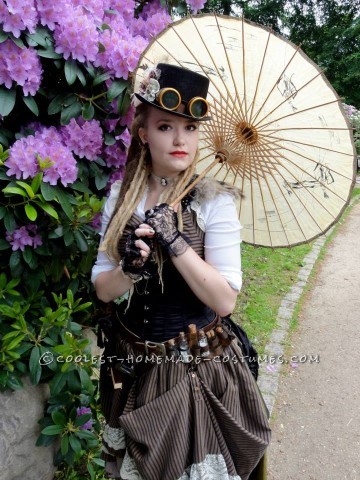 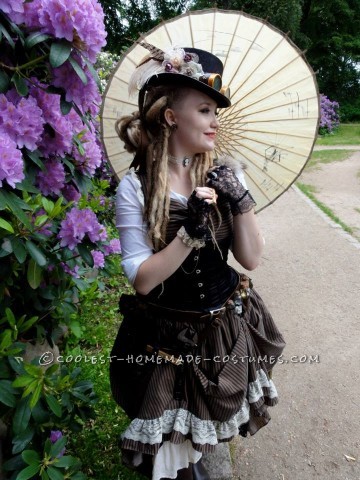 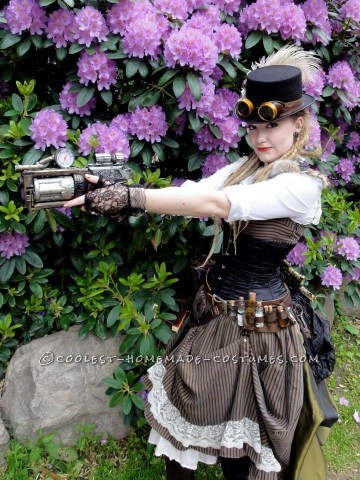 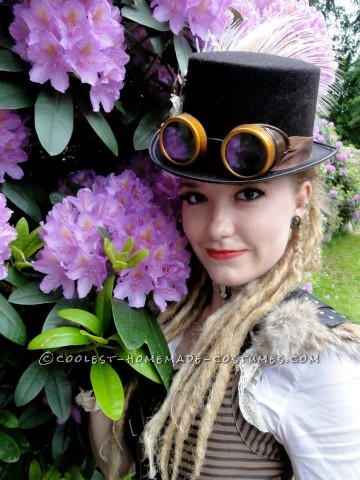 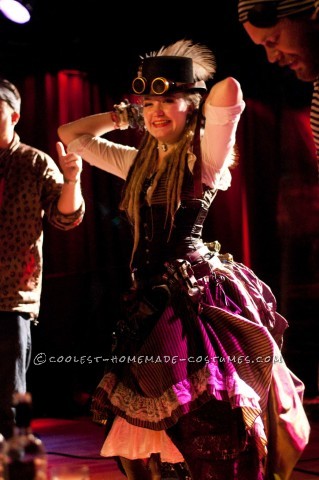 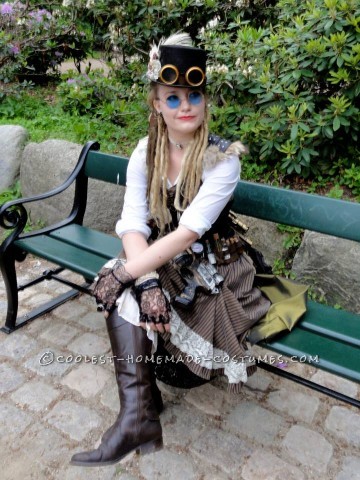 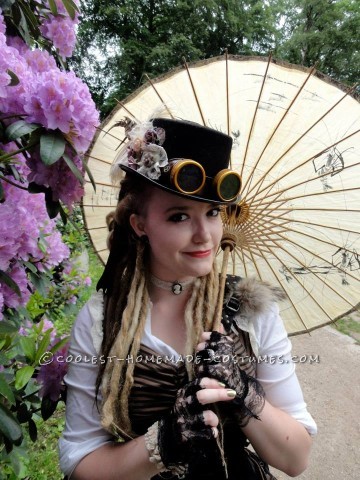 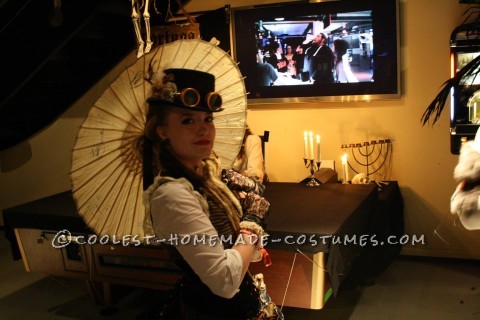 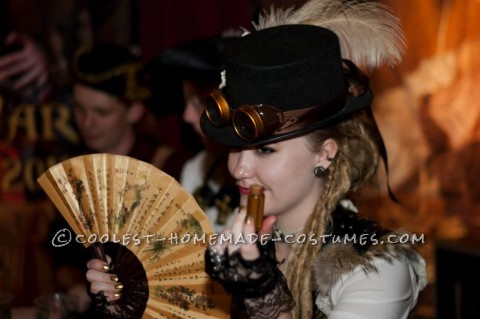