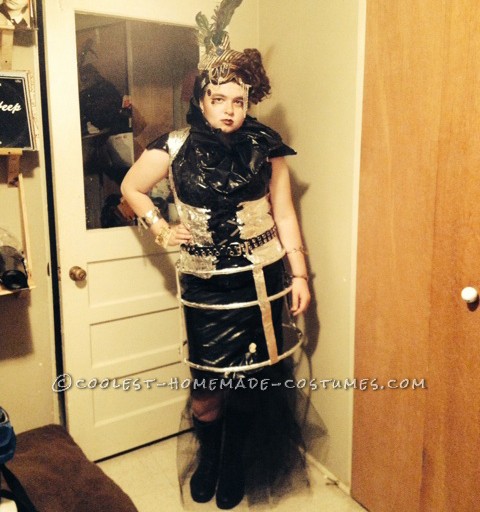 Why I made it?

When I was 13 I moved to my eighth school and by that time I felt isolated. My dad had become sick and we moved due to medical reasons. I was naive and within a year, I had matured greatly. I needed something to grasp onto that would busy me and that is how I found out about Steampunk. I was automatically drawn to the idea of an alternate future. I started my Steampunk costume five years ago and I keep adding to it.  The first piece I made was the hat and I have probably made five pairs of goggles. The costume is amazingly natural to wear and people that recognize Steampunk are always impressed when I tell them about my costume. I initially wanted to be a Steampunk pilot but it has evolved into a Steampunk inventor. An inventor would not be complete without their goggles. I knew that I wanted a cage skirt and a corset and I made both by my two hands. Steampunk has grown and developed with me and it has become my usual and elaborate costume. Five years later and I still buy and make new pieces each year. What can I say, I have an addiction to adding to it.

How I made it?

For the shirt, I used a basic sleeved snap-on blouse but I wanted the faux leather look so I cut up the shirt and I meticulously covered every inch in black gorilla tape.  I realized that the shirt was too small so I cut open the sides and took an old lace shirt and sewed lace inserts in the side. I made the collar of the shirt by using thick black plastic sheeting and I used a clothes hanger to shape it, I then sewed it onto the top and I used another hanger to add support to it.  I made the corset out of an old vest; I cut off the buttons and made holes where they were. I then cut the vest into the shape I wanted and I covered it in sticky aluminum foil. I then found an old bootlace that I sprayed black and used for string.  I bought a belt in the punk area at Halloween Express to hold up the cage skirt. I made the cage skirt out of three hula-hoops, poster board, straws, and sticky aluminum foil. I had my friends hold the hula-hoops for me while I attached them together with poster board and straws. I made the skirt out of the thick black plastic sheeting and tulle. I then made the bracelets out of old bracelets, washers, keys, tape rolls, sticky aluminum, and charms that I have collected. I made the hat out of a hat purchased at Halloween Express, I glued peacock feathers to it, and chains and I glued the entire thing onto a headband. Lastly, I made the goggles out of a ski mask that I painted with nail polish, and then I glued chains, charms, gears, and a feather to it.