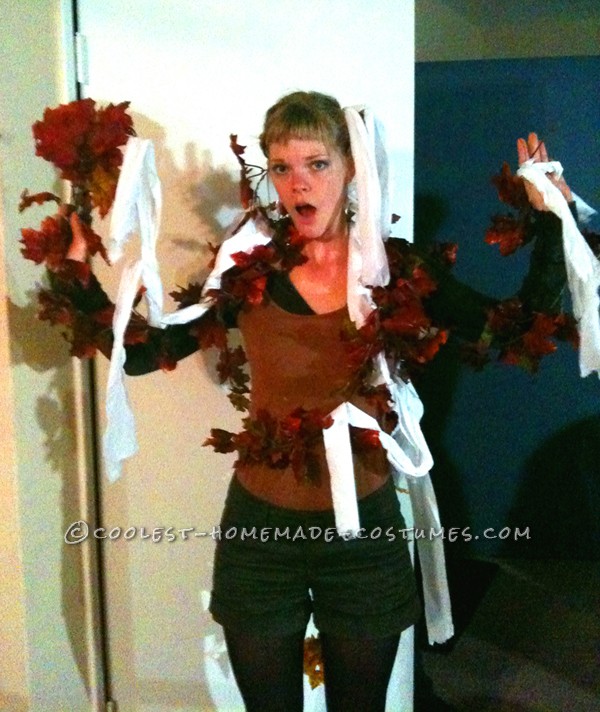 This past Halloween I decided to be a tree. Then, I thought, wouldn’t it be funny to be a tree that had been toilet papered? Many of us have been either on the giving or receiving side of that classic high school prank. My family’s house and trees were toilet papered once (to both my horror and pride), and I returned the prank a couple of times as well.

To create my costume, I started with an old brown tank top that I already owned, 3 long (5-6 ft.) leaf garlands, and 1 leaf bouquet. I bought all of the leaves at Michael’s craft store about a week before Halloween, so they we ridiculously cheap. I cut one of the garlands in half and sewed it down at a few points down my shirt – one half in front and one half in back, coming down diagonally from my shoulder (like a sash). The garlands were easy to sew – I just looped my needle around the stem and occasionally pushed it through the plastic part of the stem.

I cut the second garland in half also. On one of the halves I wound wire around the stem so I could position it to stand up like a collar. I attached it at the middle with thread to the other half and sewed either end of that half to the shoulders of my tank top.

I wore the third garland simply as a “feather boa” and carried the bouquet in my hand. The final touch was the toilet paper – I just pulled long strips of it and tucked it into my hair, my shirt, my pans, and threaded it haphazardly throughout my leaves!

I was able to wear this costume with regular clothes underneath (in woodland colors) so I was warm and comfortable. It garnered many chuckles at the Halloween party I attended!