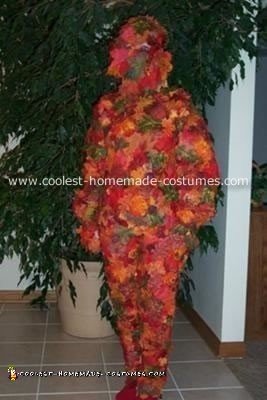 I saw this idea for an autumn leaves costume on Familyfun.com web site, it was called Leaf Man. I wanted a unique and unusual costume for a co-workers party, also one that would not cost an arm-and-a-leg to make. The original costume suggested using just a red half mask, however, I wanted to be completely covered in leaves, face included, so I came up with my own version.

To make this costume I used a red sweatshirt and sweatpants I already had from a previous year when my husband and I went as Thing 1 and Thing 2. I also used the red socks and gloves. To prepare all parts of the costume prior to leaf covering do as follows: To cover my head and face I used a pair of nylons which I stitched the leg openings closed where they meet the panty, then cut the legs just below the stitches (not on the panty side but the leg side). This made a pull on snug fitting head cover that I could pull far down over my forehead and ears.

For my face covering I used a surgical face mask (I work at an animal hospital so had easy access to one) to which I sewed a red rectangular piece of scrap material ( I purchased at a fabric store from their fabric scrap bin for a buck) to cover the white mask. To do this I cut a rectangle slightly larger than the face mask, then folded the edges of the material just over and behind the face mask. I used a tacking stitch to secure the material to the mask. I had to use a large running stitch along the short sides of the rectangle and pulled the thread to gather and match the gathering pleats of the surgical mask before I tacked the sides to the surgical mask. If you cannot find a surgical mask I am sure you could omit it and just use the rectangle of material, gathered at sides and edges folded and stitched the same as it would for the surgical mask version. If so you will need to also securely stitch a loop of thin elastic to the short sides of the mask. These loops will be pulled over behind your ears to hold the mask on.

For my hands I stitched each finger of the gloves around and near where each one is attached/meets the hand. Do not stitch closed or together! These stitches are to help prevent the knitting from unraveling when the fingers of the gloves are cut off. Stitch completely around each finger, then cut off fingers of glove above the stitches. You now have fingerless gloves. I chose to have the fingerless gloves so that I could pick up food and hold a glass at the party, but you do not need to make the gloves fingerless. Once I had all these items prepared I began attaching the leaves. I fortunately found autumn colored silk leaves on sale at a craft store. The boxes did not state a leaf count per box, so I just eyeballed and guessed how many boxes I would need. I ended up having to return for 3 more boxes before my costume was finished. The boxed leaves were mostly various colors and sizes of maple leaves and I wanted a bit more variety, so I also purchased two large garlands of silk oak leaves, which I just cut the leaves off the garland.

For the nylon head cover, face mask and gloves I stitched the leaves on. I found it worked better if I would put the item on, find a good placement of the leaf, hold it there, remove the item and then make a single tack stitch or two to secure it. Since the nylons, and gloves are stretchy I wanted to be sure I was allowing for some give. If the leaves where stitched down or glued without this allowance they would pull, pucker or become detached. I began attaching leaves first to the edges of the nylons, making sure the leaves extended past the edge so that they would adequately cover the nylon edges and I would also have maximum face coverage. I continued over lapping and layering the leaves in this fashion until the entire nylon headpiece was covered.

The face mask I did the same, only I did not worry about the stretching aspect since it is not stretchy material. I still started out attaching the leaves along all the edges first and extending them. I tried it on before I would attach any leaf to be sure of placement and maximum coverage. I extended the leaves past the edges so well that they covered most of my glasses frame.

The gloves I started the leaves at the fingers edge, again extending the leaves past the edge to help cover my exposed fingers. I continued attaching leaves till the hand was covered, but left the wrist area without leaves. This way I could pull the gloves on the pull the leaf covered shirt sleeve wrist end over the glove wrist band.

For the body covering I hot glued, using fabric hot glue sticks, the leaves to the red sweatshirt and sweat pants. Hot gluing went faster then stitching and I only lost two leaves all night. I started the shirt at the bottom edge, extending them past and pointing downward, and worked my way up. Before I got to the neckline I made sure I placed leaves around the neckline extending them upward. The same for the sleeve wrist bands.

The key is to arrange the leaves to get maximum coverage and so that they are not all going the same direction. Mix up the colors, sizes and type leaves, this produces the best natural look. I also made sure I used only flat silk leaves without any stiff plastic veining in the crotch, pants seat, and armpit areas for better comfort and movement. I did not cover the pants all the way up to the waistband, as it would have been difficult to pull the shirt over the leaves. The leaves make the clothes thicker. So I just attached them up to and just past the point where the shirt overlapped the pants. I was going to cover my socks, as well, but ran out of time. I just wore the red socks and a pair of medium brown leather mules. I must admit this costume took much longer then I anticipated, a total of 20 hours, but it was well worth it all!

When I arrived no one had a clue who I was! I think it would have been even better, had I had time, to have added a few leaves to the end of a length of fishing line and attach the opposite end of the line to my shirt sleeves or other areas of the costume. Then when I moved, especially my arms, it would look like falling/blowing leaves!