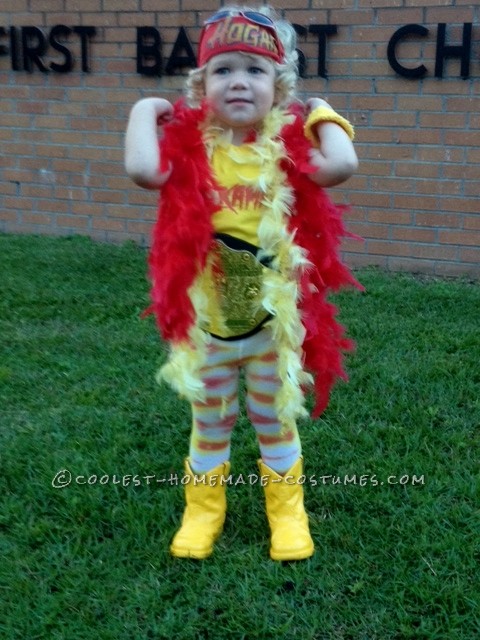 This year when I asked my two and a half year old son what he wanted to be for Halloween, he replied with the name of a little girl he likes in his class. While I knew that wouldn’t happen, I also didn’t want to take him to the store and let him pick out some cheap, flimsy costume that was boring and original. So I took matters into my own hands. You see, my son has this head of hair that everybody goes crazy over. Blonde and curly…what more could you ask for!

So basing the idea from at least one aspect of his hair, I came up with a Hulk Hogan costume. Every peice of his costume took some sort of effort to make, except the sunglasses. I’ll start with the store bought items. I found a pair of girls white leggings on the clearance aisle at WalMart for a little over $1. Bought two white feather boas at the dollar tree. The wrestling belt was found at a yard sale for $1. Red and yellow fabric dye, yellow spray paint, and iron-on transfers. His t-shirt was a plain white shirt he slept in that i dyed yellow. His cowboy boots were hand-me-downs that we spray painted yellow.

His headband was just cut from an old red t-shirt of mine and tied around his head. I printed the words on iron-on transfers and ironed them to his shirt and headband.  I tie-dyed the white leggings red and yellow. Cut the sleeves out of his t-shirt. Dyed the white feather boas yellow and red…the red one didn’t turn out the color i wanted so i did have to end up buying a red boa.

Throughout the night, he got so many compliments and encouraged more by flexing and showing everybody his ‘non-existent’ muscles! He knew just how to sport his costume and was a big hit! 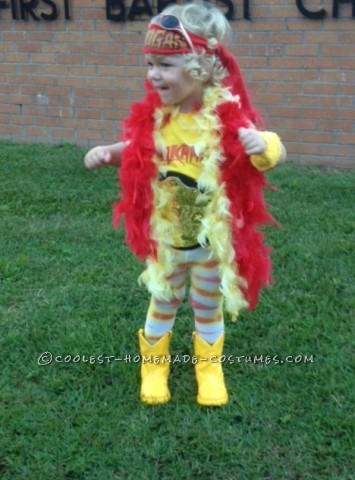 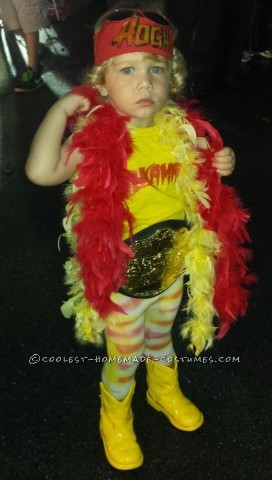