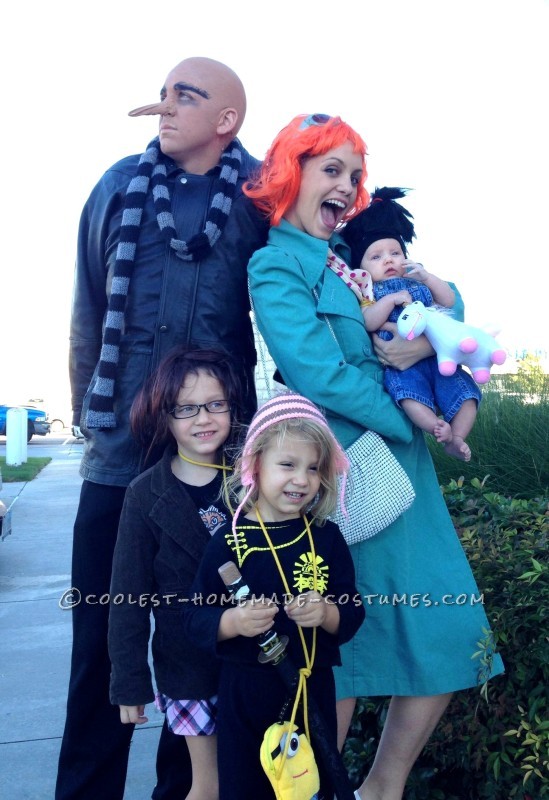 Here’s the story behind our Family’s Despicable Me costumes.

I had never been much of a Halloween person until my oldest was 3 and started to really have a blast on Halloween.  Last year, we dressed up as Monsters, Inc., and my kids dressed up in their costumes all the time long after Halloween was over and talked about how fun it was forever.  This year, we were initially planning on doing a Veggie Tales theme for Halloween. But then, my 3 year old Violet starting wearing a pink-striped beanie that her aunt had made every single day.  The hat was supposed to be for a one year old baby, but Violet didn’t care. One day, while she was wearing the hat in 90 degrees weather playing by herself (not with the kids in playgroup), I had a “light-bulb!” as Gru would say.  I realized how “Edith” her personality is, and also that I have three little girls.  I just had a baby – my third baby girl – on August 24th.  What would be more perfect than to dress up in Despicable Me costumes from Despicable Me 2, one of our very favorite movies?

I began collecting thrifted items (a plaid skirt for Margot, a ninja costume and black boots for Edith, and a trench coat for Agent Lucy Wilde…).  I seriously had a huge list of very specific items to find.  Attention to detail is very important to me; I believe those small details are what make costumes really good. We Googled lots of pictures of the movie (since it’s not out yet on DVD) to make sure we had all the details right.

After enough thrift trips, we had a lot of the most important components for our Despicable me costumes.  I was even able to find more specific items like turquoise glasses for Lucy. Other things had to be improvised.  I took a black and gray striped sweater, cut it up and sewed it into Gru’s scarf.  Lucy’s polka dot scarf was actually a headband that had wire inside so it would keep its shape. I loved that it could stick straight up or out – it gave my costume a really cartoonish feel. We found a ninja sword for Edith’s costume at the dollar store.  I printed out a picture of the Lorax’s head onto a sticky label and put it on a plain black tee shirt for Margot’s outfit.  One day at a thrift store, as I scoured through all the piles of Halloween stuff, I found a “ponytail.”  Instead of a full wig, it was just a ponytail of fake hair.  I laughed out loud when I realized I could use it for Agnes’ ponytail that sits right on top of her head.  My 2 month old did NOT like it when I strapped it to her head, so I eventually came up with the idea of cutting the legs off a pair of black tights and hot gluing the ponytail to the top; it worked quite well!

Pieces we just couldn’t find, we bought on Ebay.  We bought Agnes’s fluffy unicorn, Lucy’s wig, and a plastic lipstick pen for Lucy’s “lipstick taser!”  When my 5 year old heard I would be wearing a wig, she wanted to wear one, too.  After all, Margo has brown hair, not blond like hers!  So we totally got a cheap one off Ebay for $6, why not?  We also got little Minion purses for Margo and Edith so that if we weren’t all together, people could still figure out what they were.

Gru’s costume was the very hardest; we really wanted it to look realistic.  We took a black leather coat and stuffed lots of hoodies under the shoulders to make the shape larger more hunched.  I did my husband’s bald cap; I had never done anything like that ever before, so thank you, Youtube!  I was super worried that the whole thing would be a giant flop (forecasts that it might rain on Halloween didn’t help), but it really wasn’t too hard and worked out great!  It took almost 3 hours to do, so thank goodness that it did NOT rain, or our Gru would have melted!  We made Gru’s nose out of a rolled up index card covered in a latex medical glove.  I used spirit gum to paste the nose on my hubby just like I had done the bald cap.  And then we covered his whole head in lots and lots of makeup!  Huge drawn eyebrows and circles under the eyes completed the look.  My husband practiced his accent for all of October, all the while my 5 year old, Lucy, coached him on Gru’s lines.  “No dad, you have to say it like this; ‘you will not sneeze, or burp, or fart, or do any ‘nnoying things!’”

One of the highlights of our Despicable Me costumes on Halloween night was when we were driving.  I look over, and happen to see a man point us out to the woman in his car.  She literally jumped out of her seat and grabbed her chest.  Both cars were laughing too hard when the light turned green.

It was fun to have strangers want to take your picture, and we brought huge smiles to lots of faces.  It was also funny, though, to see people’s reaction who hadn’t seen the movie.  We got plenty of looks from people that let us know we are just a little crazy!  We had pictures taken at the Target Portrait Studio, and our photographer hadn’t seen the movie, either, it made us feel a little silly.  My husband had a fun time giving people who stared at him dirty looks, as Gru himself would have done.  However, he made the mistake of doing that to a young girl; she wasn’t too sure of him to begin with and started to cry!  Overall, we had a blast, and will probably continue to do outlandish themed costumes every year until our kids become too cool for it, because we really had fun. 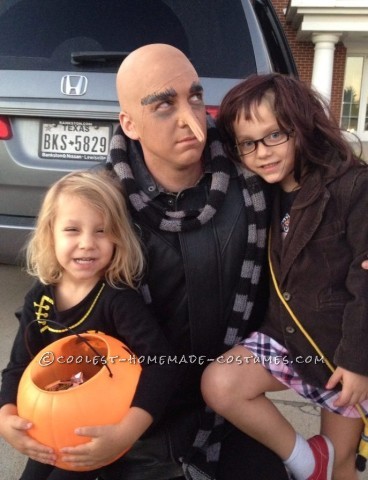 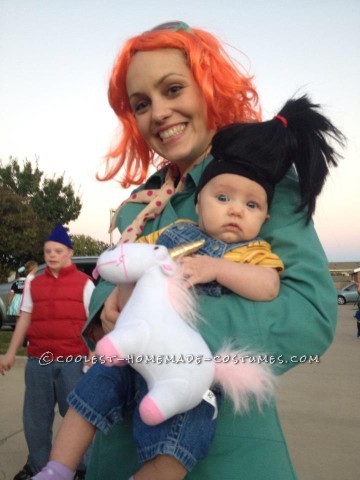 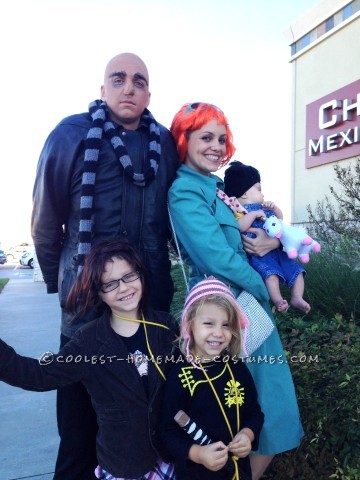