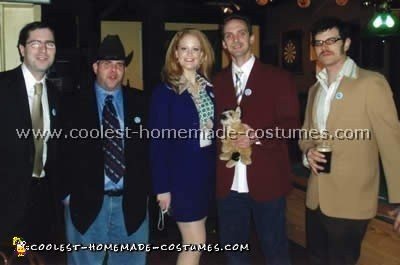 I searched the web for cool character costume ideas and finally decided on the Anchorman theme. My friends and I dressed as the Channel 4 News Team from Will Farrell’s Anchorman the Legend of Ron Burgundy! For Veronica I found a vintage 70’s looking blue suit at Goodwill and wore a polyester shirt I had in my closet. I blew my hair out 70’s style and held a large microphone.

My boyfriend was Ron. I attached a big fake mustache I bought at a costume store and he wore a Burgundy suit I found on e-bay and he carried around a little dog- Baxter the night and drank lots of SCOTCH!!

My three other friends wore tacky suits and held tridents and other weapons like they were ready to battle! Champ had a cowboy hat; Brian shaved his beard so he had a 70’s pimp mustache and Brick, well he walked around hugging lamps! I made pins that had the News Teams “4” Logo and we all wore them!

We quoted the movie all night! So much fun! We literally thought of the idea in a little under a week and were able to put it together basically with things we had or friends had in their closets. It was also easy to wear all night! The key is just to act the part for the whole night!

Good luck with your own character costume ideas!

Brady is 6 months old. As you can see he has a full head of hair which he was born with….and it never fell out. That is his real hair and he’s already had 6 professional haircuts to keep up with the growth.

I was watching the movie Anchorman for the 12th time one day with friends and I noticed Brady had the same hairdo as Ron Burgundy played by Will Ferrell. That’s where I started thinking of the costume.

I looked everywhere for a burgundy blazer for a 6 month old but it was nowhere to be found. So I stopped at the fabric store and picked up some burgundy fabric. There we have the burgundy blazer Ron Burgundy is known for.

We got the fake moustache that we had to cut but we only kept it on for pictures.

We hope you enjoy our Halloween photos!

A Ron Burgundy Costume for a Woman