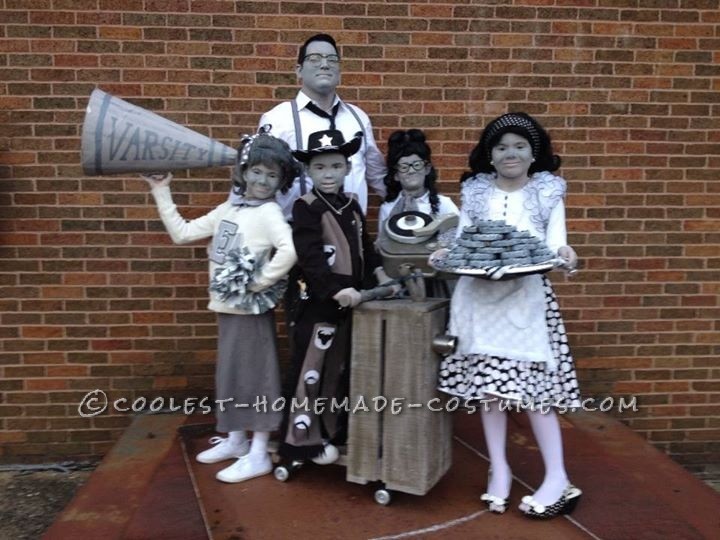 Welcome to the story of how my family got introduced to an era, that they had no clue about, ,until the beginning of September. As the kids helped me paper mache their props, and watched as the packages came in the mail, with different fun items, and as they watched me buy different shades of gray paint, their imaginations took over. I got the most classic questions from them( which I loved because as a child I often thought these very things) “ Was this what things looked like when you were little?”  “When did things start to get color?”, “ How are you going to make us look like black and white tv?”, “ What is an orange crate scooter?” Well they  were about to find out. I consider myself open and honest with the kids, but as a Dad, you gotta leave some things to their imaginations!  And as for “Daddy”, with all the shades and sewing projects, my imagination had to wait until the very end, as we all got fully dressed, to see how close I was to pulling everything off.

So this part is my specialty. I gotta say, when it comes to making things that are out of the norm, I enjoy it tremendously.  As the title to this step suggests, yes all the props that the kids are carrying, are also their candy boxes. These are mostly made out of thin foam and paper mache. The scooter is of course built from scrap wood.

I will start with the record player.  There are 4 different colors of paint and a very colorful poster board design on this prop. I wanted it to have multiple shades and look as realistic as possible. I am proud of the results.  Some of its features are, it has two compartments inside of it. The side that has the record, has a hole(in the middle of the record) and inside is a large candy collection area. The side that has the arm, is actually a handle. When  lifted, an small compartment houses and mp3 player with downloaded 50 music, and a speaker. The side of the record player has a hole cut out covered with felt, to make it look like the built in speaker.  Boy the reactions we got were great. Especially from the folks that lived through the era. On trick or treat night, people were dragging Grandma from inside, out onto the porch to get pictures with us. After much debate, my little “ Poodle Skirt Rocker Teen”, also won out on wearing the cat eye glasses. Her wig came with pink flowers which I substituted with gray ones somewhere along the way.

The megaphone was a  small challenge. I wanted there to be a crease and for it to look wooden like from that time frame.  After just rolling it though, everything fell into place. The small open end is where my “Cheerleader” would get her candy dispensed. The larger side was equipped with a circle to form a compartment. The circle was not perfect though. This way, she could actually us the megaphone to call out cheers.  I hand made the felt “E/megaphone” on her sweater. She was also rewarded with a package in the mail, with her name on it, that was a custom ordered pompom. Yea dad had to learn a little about the world of cheerleading  that day.

out to dry on actual cookie racks. And of course, daddy sprinkled them with cinnamon for fun.  If you lift up on the very top cookie, you would see that the inside of the rest of them, is hollow and this is how she collected her candy. She also got a special present in the mail. A pretty pearl necklace and matching earrings.

The orange crate scooter, is made from scrap wood, old tin cans, liquid nail, screws, and a lot of experimenting. A few problems occurred when it was realized, the scooter was top heavy. I compensated this by adding a weight to the back bottom of the creation. The scooter is equipped with a homemade sling shot. The slingshot is made from a tree branch, and an old bike tube.( just like the one my Grandpa made me when I was about that age. My little “dress up cowboy” , had a hole to put his sling shot into on the scooter itself. This also acted as the hole for his candy collection. On the inside of the makeshift crate, was a pillowcase, This hug from hooks and had grommets to keep it from ripping. When he would roll up to a house, that he could not take his scooter to the porch, he would simply undo the bag and walk on up. The wheels were off of my old skateboard as a kid. I have to admit, I made this thing like a tank,so Daddy could ride it as well.

The “ House mom” of the group, has a plate of chocolate chip cookies!  The are foam circles, wrapped in coffee filters, then dipped in paper mache. The kids all helped with this one. We set them

You Wish She Was Your Mom,But She’s Not

Around here, it is pretty much common knowledge, that my mom is the coolest. This does not fail, when it is Halloween costume making time.  My outfit all came from thrift store shopping. Thw “house mom” dress came from online,but as far as the skirts, and the entire cowboy outfit, this was made for us by my mom. I have to say, she impresses me with her sewing ability. Mostly because all of the background she has in sewing, comes from 1976 Home Ec. Class and the occasional button as I grew up.  I handed her material for the skirts, and she made them no problem. I handed her material and a picture of the cowboy outfit, and that woman tore it up! Her dining room looked as bad as mine by the time it was all said and done. And she rivaled me on late nights for sure.

Here is a fun side note. I entered us into a local Halloween contest, it was through a jewelry store. Well we ended up winning the contest! I haven’t told my mom though. I have decided to wrap up the gift certificate we won, and give it to her as one of her Christmas presents this year.  The kids and I decided this was better than trying to pick her something out. Not really my strong point….haha

This Makeup Is Ripping Out My Arm Hair

Yep, theatrical makeup is water activated.. Learn something new all the time.  Put water to it, it goes on like butter. Don’t and it goes on like putty.  Besides a nice gray base coat, we had a slightly darker gray blush, this added a cool shadow effect to our skin.  The girls also got their eye done with mascara and white eye liner.  They had gray lip stick as well. Me and the boy just stuck with our basecoat for the lips. If you notice any of the pics where I have a newspaper under my arm, this actually opened up by Velcro, and was lined with fely. This pouch contained our makeup on the go, for after those candy breaks mostly.(Can’t forget those.Great moral boosters).

So, after hitting every thrift store from here to timbuck  two. And patronizing the local fabric store more than any dad ever should. And probably eating at one too many “all you can eat” pizza buffets.  Here is our finished product!  We got rave reviews on the social media site, our friends reactions were uplifting, random people thought we were part of the show at a fun event we attended.

I will finish with this closing thought… I want to thank my kids for putting up with my mind. May their kids never get to choose their own costumes either haha. Happy Halloween everyone!  From The Edward’s FamilyJ 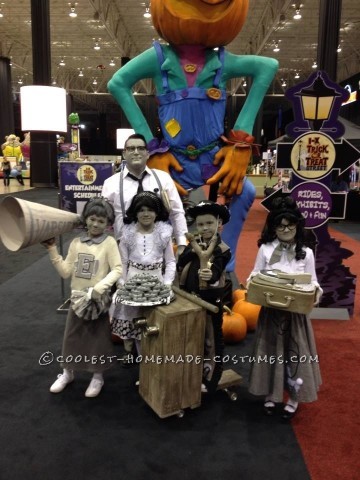 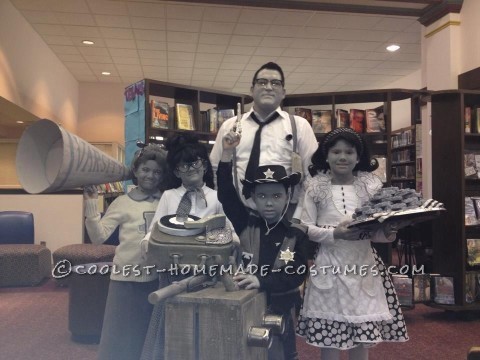 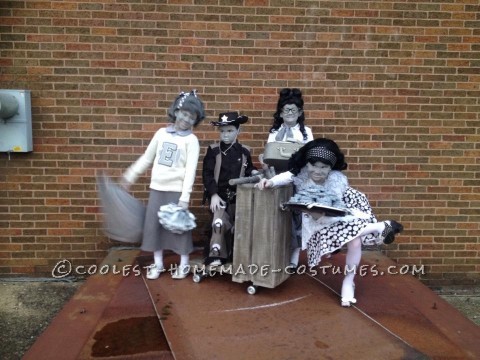 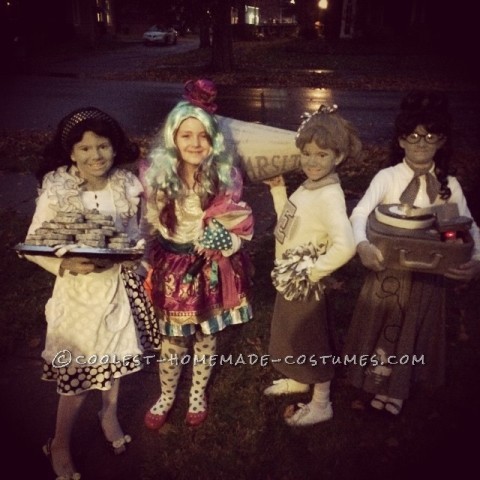 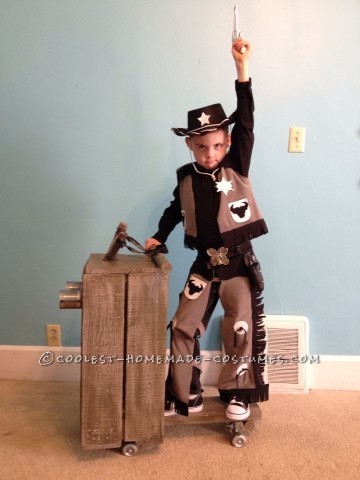 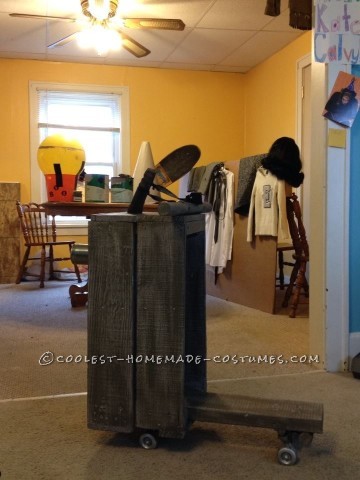 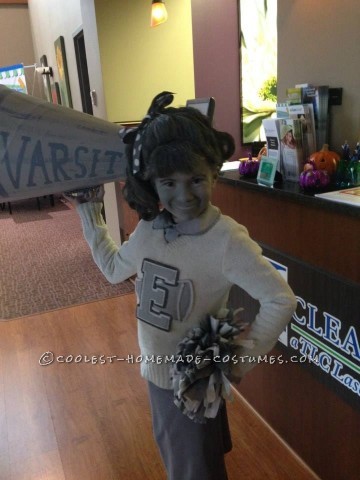 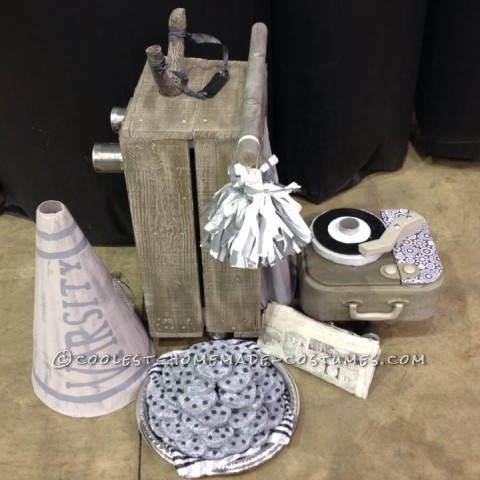 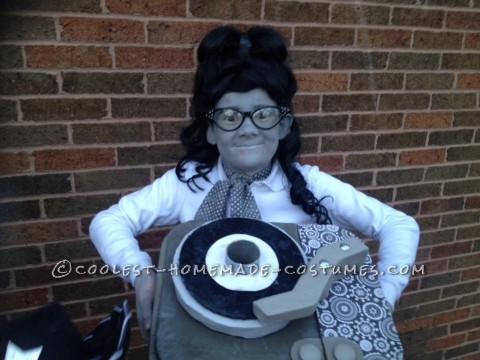 Anubis and Isis Costumes Made of Completely Recycled Materials!