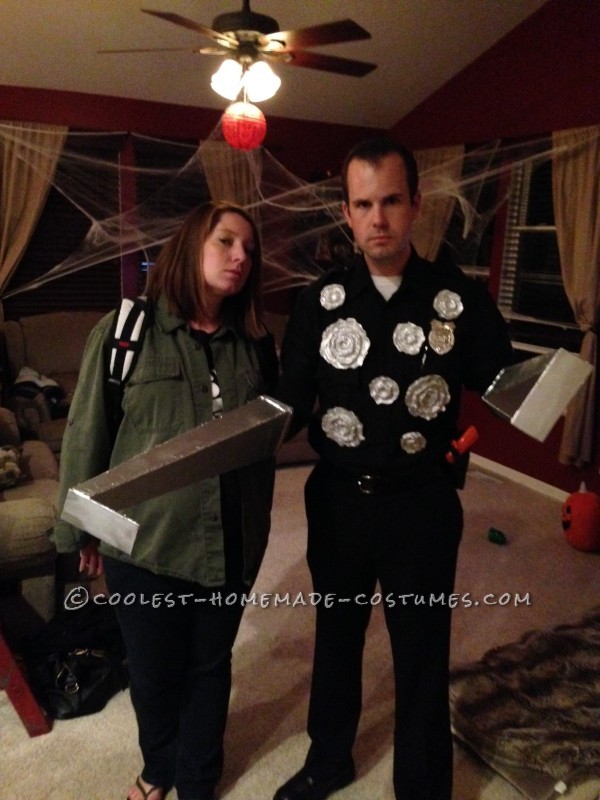 The T-1000 costume was actually pretty simple, but it turned out very well. The base of the costume is black pants, a black button down shirt, black Red Wing low cut shoes and a white undershirt. The shoes and pants I have for work. The black shirt is actually a real policeman issued shirt that I purchased from galls.com. After looking at the typical policeman stuff at party stores, the actual shirt was cheaper, higher quality and looked more realistic (since it actually is real). The badge was a $1.99 Party City purchase and the police belt accessories are from there as well. I would omit then Party City police belt stuff next time or spring for more realistic stuff since it was poor quality.

The arms are made out of silver foam core and painted chrome with Hobby Lobby chrome spray paint. I fabricated the arms in four distinct pieces, taped the inside with gorilla tap and hot glued the seams. The end hook is a single piece of foam core. I at first thought the hot glue would look poor, but once spray painted, it actually looked like molten metal. At the arm end, I cut the end off black socks, hot glued them on and spray painted up the seam as to appear like the blade was part of the black shirted arm.

The bullet shots were made from 2 lbs. of paper clay from Hobby Lobby. I created these by making multiple clay balls of varying size and then pressing my thumb in the largest to create the splatter effect. I then added another, smaller clay ball and did the same thing. I did this three to four time for the large shots and twice for the small shots. I flared the end to look jagged and defined the ripples with a pencil roughly. Paper Clay dries in air (no baking). It took about two weeks to dry even though the package said three days (plan ahead). After drying, the different clay layers started to split and separate. I hot glued to seams. Again, I was worried that it would detract from the shot. However, the clay looked like solid metal blown apart and the hot glue looked like it was started to melt back together; a very cool effect. I hot glued safety pins on the back of the shots for easy arranging and attachment.

John Connor (my wife) was insanely easy. She is pregnant in the picture and wanted a comfortable costume. I purchased a Public Enemy t-shirt online, have an army jacket and back-pack and had her wear jeans.  Her hair was already short for locks of love. We opted not to spray paint it black.

Lessons learned: It was tough to get the spray paint even, I had to take the arms off to eat and drink – a trap door in the future would have been nice, I would have either omitted or purchase real utility belt items – the party store ones were a waste of money although the badge looked nice.

PS: This won the costume contest at my friend’s house and at work.