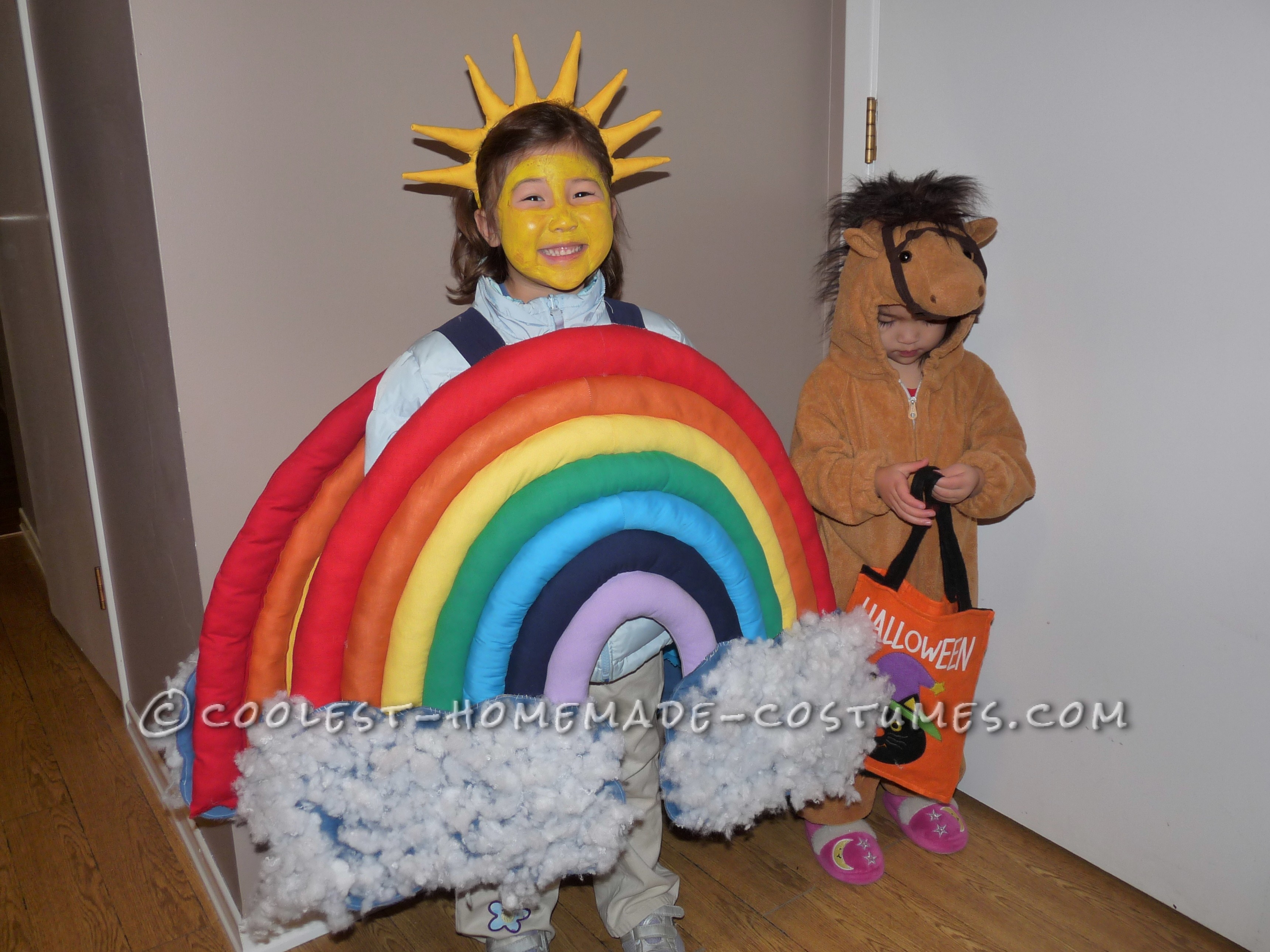 This Rainbow Costume was the very first costume I’ve ever made. My 5 year old daughter at the time, piped up she wanted to be a rainbow for Halloween. A RAINBOW?! Sheesh.. where was I going to find a rainbow costume?? Yeah.. just as you were probably thinking.. um.. nowhere!

It was time to get creative! I scoured my materials, hit the thrift stores and began chanting ROYGBIV (Red, Orange, Yellow, Green, Blue, Indigo, Violet) in my head. I gathered up the colour of materials needed, grabbed a big breath of air and began drawing out the rainbow arches (still chanting ROYGBIV)!

Next, I dusted off my sewing machine, which has sat untouched in my basement for 10 years. Yep.. that shows you how often I sew. It’s just like riding a bike.. right? Not so, I discovered as I kept getting my threads tangled up and my stitches coming undone or too tight. After countless ripping out the stitches, I finally got all 7 rainbow arches sewn up, ready to be stuffed.

Now being the cheapskate I am, I began wondering how was I going to get these arches stuffed? Then it hit me. While my daughters were sleeping, I went down into the basement and gathered up all the OLD stuffed animals they no longer played with. I sat in my closet and wielded my scissors and those poor stuffies didn’t stand a chance. I grabbed all the stuffing I could and quickly disposed of the now flattened stuffed animals before my girls knew what was going on! I began stuffing the arches. Stuffing and stuffing and stuffing. It took forever!

Finally, when the arches were stuffed, I sewed the arches together. Drew out some clouds and hot glued cotton balls onto them. Then, I sewed the clouds to the ends of the rainbow. You’d think I’d stop there. But nope, I guess, I had to find a way to challenge myself.

What is a rainbow without some kind of sun? I cut out a bunch of triangles, sewed them together and stuffed them as well. Then, I hand-sewed each of them to a headband. Finally, the rainbow costume was complete and I was rewarded with the biggest smile from my daughter. It makes all that toiling worthwhile!

Girl and Dog Costume – Rainbow and Pot of Gold