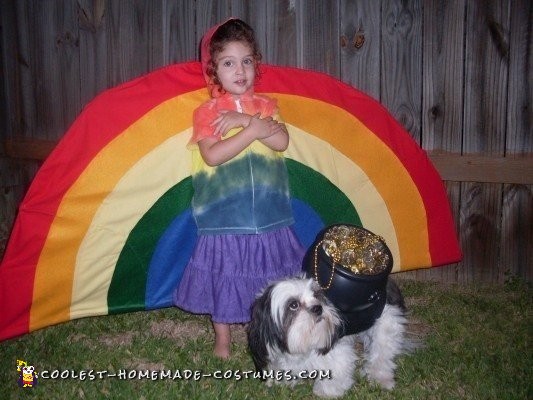 Meet Glory my little sunshine and her loving dog Karma. We knew they wanted to dress up together so that is where the brainstorming began. I’m not really sure who said “Rainbow and Pot of Gold” first but it stuck.

The pot of gold wasn’t too hard to make. I made hot glued a bung of coins to black felt and then glued that to the inside of the rim of the plastic pot. I knew filling it with coins would be too heavy for the pup. I then used a heating tool to cut the bottom to my dog’s shape and attached it to a black doggie sweater.

The rainbow is felt pieces fabric glued together and a broom handle at the bottom to keep it straight. In order for Glory to wear it I tie-dyed a white terry cloth hoody. Then we sewed it to the rainbow while lining up the colors. Surprisingly many hallway and entrances are not wider that a broom handle. Glory is three so it’s hard for her to remember how wide she is but she maneuvers like a champ.

We attended a dog Howl-o-ween contest and these two took home second place. I was so impressed at how brave Glory was. She took her dog and walked down the runway waving and smiling. When Karma tried to lick one of the judges Glory pulled her back. She did it all by herself.

After that success we decided to enter the city contest last weekend. They have several categories kids 3 and under, kids 4-7, kids 7 and up, adults, and pet. Since pets was last it was too late to enter so we just entered the 3 and under category. Again Glory took her dog all by herself. She walked the whole way down and around the stage. I knew it went well from the crowd’s reaction. Don’t you know it they took home first place out of over 100 entries? Radio Disney was there so our prize included concert tickets. I’m looking forward to taking Glory to her first concert and enjoying the spoils of creative work.