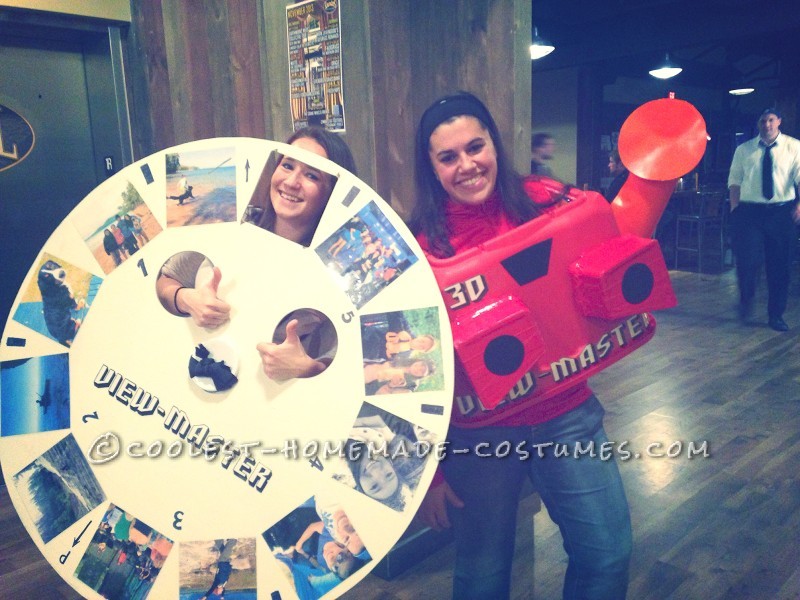 I LOVED the View-Master when I was a kid! I had all sorts of slides for it and I guarded it with my life! When we were trying to think of a good couples costume this year, we decided to go nostalgic.

We weren’t sure if people would recognize what we were supposed to be- until coming up to our first bar, when the bouncer started jumping up and down yelling “Oh my God!! I grew up with you!!!” For a moment we forgot we were in costumes and looked at each other confused, because neither of us recognized the man, and then we realized he was talking about the View-Master.
The night went on like this. Every other person had a comment, a story or wanted to take our picture. We decided to head to an 80’s Halloween costume party where the reactions only got better. On older man came up to us in tears and told us a story about how he was going through his attic just last week and had found his old View-Master that his late mother had given to him years ago.
The reactions were incredible! Most people saw the big white circle first and came up telling us how awesome it was… then they realized we made the view-finder to go with it and that’s when they would FREAK out.

We both had a blast reminiscing while making the costume, but even better was watching memories unfold for the people around us when we took it out. The Children’s Museum in our hometown asked us if we would donate it to be put up in their museum as a display piece- and we think that’s a wonderful home for it now that Halloween is over. :)

The Viewfinder costume was made out of a red tote we found in the garage. By cutting the bottom out I was able to wear it over my head while resting on my shoulders (which I found out the hard way was incredibly painful- next time I’m wearing shoulder pads!). We cut holes in the sides to put my arms through and attached the eye pieces with red duct tape. The eye pieces were cut and formed together from 2 old boxes of creme puffs (which luckily were made from red plastic). After finding a font to match that of the old View-Masters, we printed out the labels and laminated them to waterproof them from a rainy halloween ahead. We made the lever out of some strong safety fencing we found in our backyard, wrapping it around my forearm and then cutting out the circle and making it into a glove with duct tape.

We then cut the slide wheel out of some scrap, and very light, plywood in our shed. A friend of ours helped cut out the circles for the axis and arm holes and then the box at the top for my girlfriend’s face to fit in. We painted it white and measured out the right size and amount for the pictures/slides. After printing, cutting and laminating the pictures we glued everything on with liquid nails and started on the straps. We managed to find a white cap to an old peanut butter jar and made a slit to put the nylon webbing through for the straps (we were so glad we did this! Made the costume so much easier to walk around and socialize in).