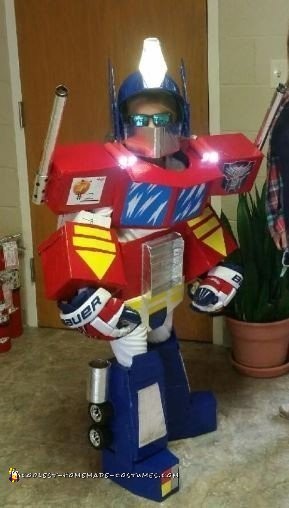 My creative 9-year-old son, Blade, wanted to be Optimus Prime Transformer,  so I started brainstorming!  This costume was a challenge because of all the individual pieces. Make sure and measure your child perfectly before you begin ( I learned this the hard way). Total money spent was around $25 as I used a lot of items I already had laying around the house.

You will need common items such as

The body pieces are all made of cardboard and wrapped with duct tape to give it a sturdy and shiny finish. I used Crafter’s foam for the details on the hands, feet and chest pieces. I used hockey gloves for the hands. The helmet was an old baseball helmet wrapped in duct tape with added cardboard pieces.

This costume won first place in a local costume contest at the Great Pumpkin Festival in Allardt TN earlier this month! The crowd was in AWE as my son Blade took the stage as Optimus Prime!!!!!  As he exited the stage he turned to the crowd and yelled “Roll out Autobots!!” It was a great finishing touch to this costume!

He was so proud of his FIRST PLACE ribbon!! We had total strangers stopping us and asking to take a picture! My 9-year-old son was super proud of this costume which made me super happy!

I have enjoyed making all his Halloween costumes over the years, such great memories. I strongly suggest to everyone to give it their best shot and make Halloween fun! Thanks Kenna (mom-creator) 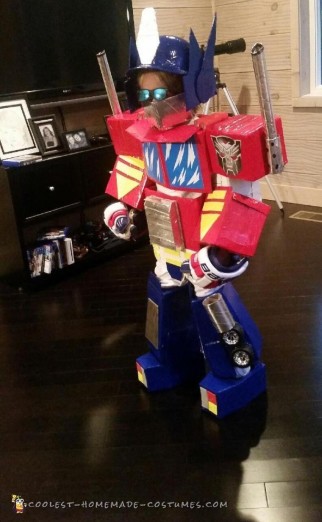 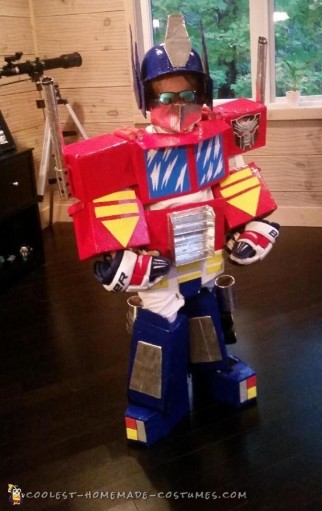