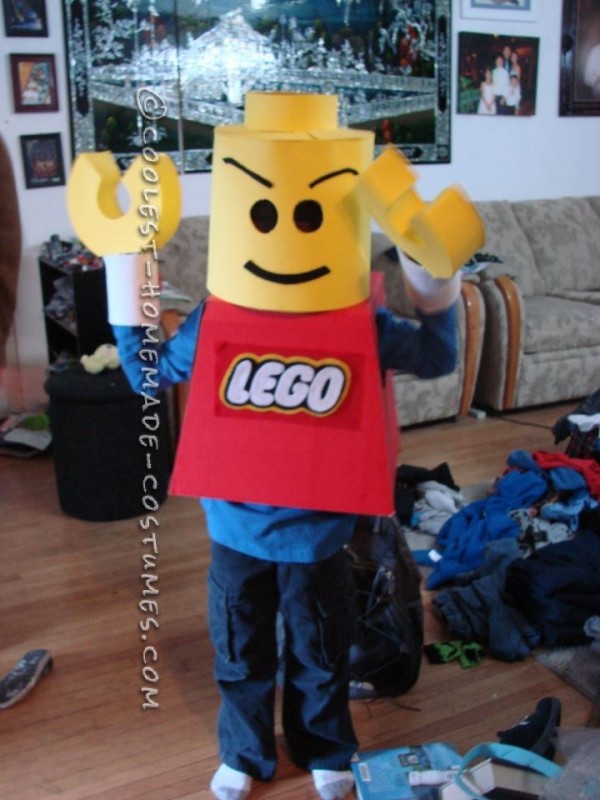 My 8-year son has been obsessed with Legos for the past 3-4 years.  So when I asked him what he wants to be for Halloween he said “A Lego Man”.  I went and Googled “how to make a Lego costume” and several helpful links came up.  Our costume is a combination of ideas that we gathered from YouTube, Google, and your website of course!  The entire thing cost less than $10.

It took a bunch of hot glue which we already had and stuff that we found around the house.  Instead of using regular cardboard box and painting it red for the body, we went to buy a red tri-fold presentation board to use as the body.  Fed-ex envelopes were used to form the head and felt and foam paper were used to cover over the envelope.  We used Pringles chip cartons for the arms and again Fed-ex envelopes to form the semi-circle for the Lego hands.

Not too hard to make, just needs a little time and concentration to make sure the body is measured accurately to fit my boy.  He was the most popular kid at the Halloween assembly in school.  He won most original in class, most original in the entire school, and also won another award from his after school program.  He received so many praises he was walking on clouds.  They even chanted “Lego Man, Lego Man, Lego Man” during the assembly.  I was so excited for him too.  Not sure how to top that costume this year though.