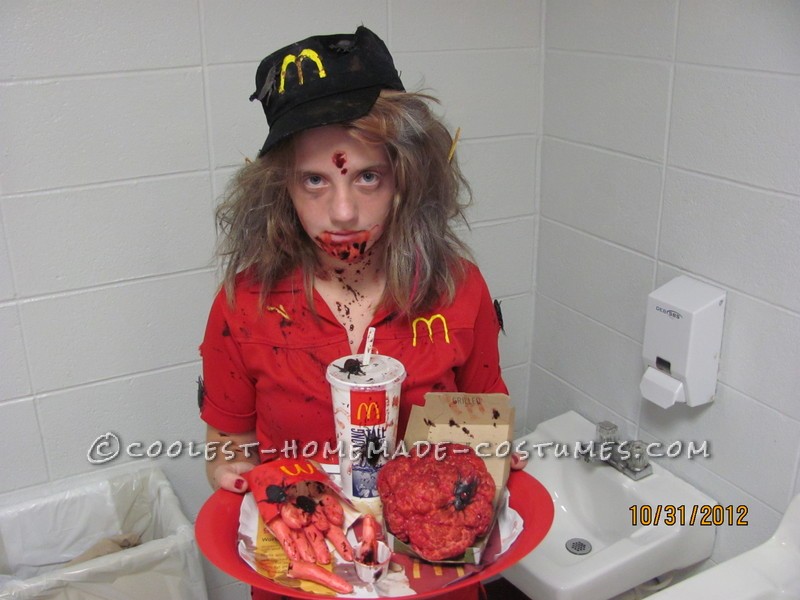 It all started when my daughter said she wanted to be a zombie for Halloween. I thought to myself OK, but everyone will probably be one too! A few days later, my daughter and I headed to “town”, we live in the middle of no where, to get zombie supplies and stopped to eat lunch first, and you guessed it, at McDonald’s. That’s when I had a vision, she can be a McDonald’s Zombie worker!

Needless to say we kept our trash from McDonald’s that day! Then it was off to get the remaining supplies. First, we stopped at a thrift store and purchased a shirt and pants for just .50 cents. Next stop was Walmart to get the basic makeup paints, hat, props, zombie tattoos, blood, brain and fingers. I couldn’t believe it, I got out of Walmart for only $13.50 plus tax of course. Although I would of loved to have been done I had no luck finding a brain and fingers. So, my next stop was Dollar General. At first, I didn’t think I would have any luck but I was wrong. They had 2 bloody hands left and I could just cut the fingers off for a low cost of $5. All I needed was a brain, no pun intended! My daughter speaks up and says how about cauliflower and paint it red! There it was my daughter a genius! So a quick stop back to Walmart and $2 later we had a brain!

So for $21 and 5 stops  we had ourselves a complete zombie costume! My daughter says funnest part of putting this costume together was rolling the dirt. I say the funnest part of putting the costume together was making the McDonald’s “meal” tray. The end result was awesome and everyone thought so too since she won 1st place in her school costume parade. I had a lot of comments from parents and other classmates that ranged from “gross” to “how cool”! Thank you for your time and consideration!