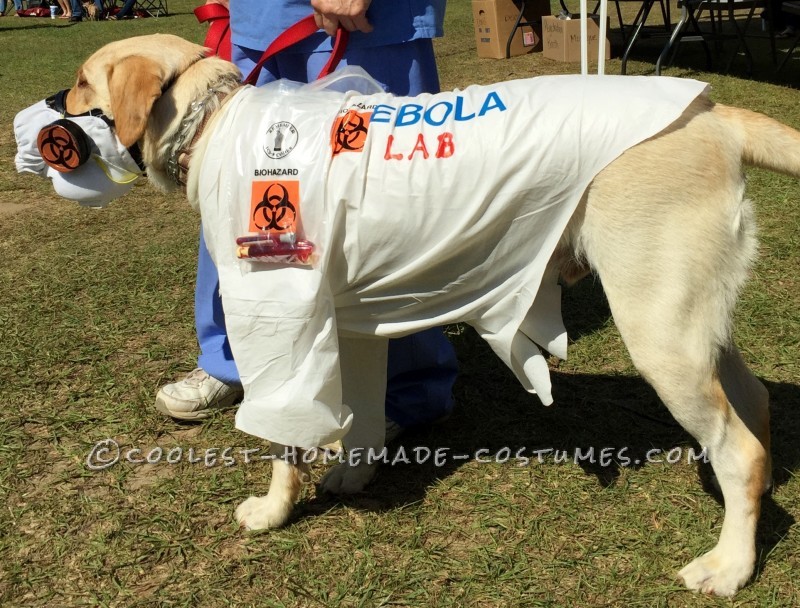 Star 98 Radio and Kia Motors sponsor an annual “Dog-O-Ween” contest to raise money for the local humane society in Tallahassee, FL, so we entered our Yellow Lab, Beau.  With all the news these days about Ebola, we decided to make him into an “Ebola Lab.”  Outdated lab supplies were found at a local thrift shop, and we  paid $1.75 for a bag full of test tubes, biohazard bags and other medical supplies.  The mask and disposable suit came from the local Porter Paint Store.

We used a Greyhound muzzle to make the face mask, and 2 Skoal Cans to make the respirators. Because the cans are black, and the muzzle is black, I covered the muzzle with some white fabric so the cans would stand out. I used Velcro to attach the cans to the muzzle.  It worked fairly well, but if Beau shook his head really hard, or rubbed against anything, the cans fell off.  We used red food coloring in water to make “blood” for the test tubes. The word “EBOLA” was made using stick-on letters, but we ran out of letters so we wrote the word “LAB” with a stencil and red marker pen.  We attached the biohazard stickers and plastic bags to the costume with spray adhesive.  At first we tried to use the entire suit for his costume, but when we put all 4 legs in it and zipped it up the dog went nuts.  At that point, we cut off the bottom part of the suit and used a safety pin under his belly to keep the suit away from his back legs and feet.  He didn’t seem to mind the modified costume.

When Beau walked across the stage for the Dog-O-Ween contest, everybody in the crowd was clapping and cheering.  After we exited the stage, lots of people came up to take his picture.  Everybody commented on his unique costume.  There were 47 entries in the contest, and Beau won First Place.  That is what prompted me to submit his pictures on-line.  I thought other people might enjoy seeing his costume, too. 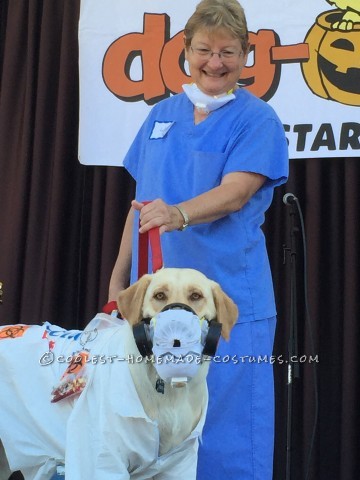