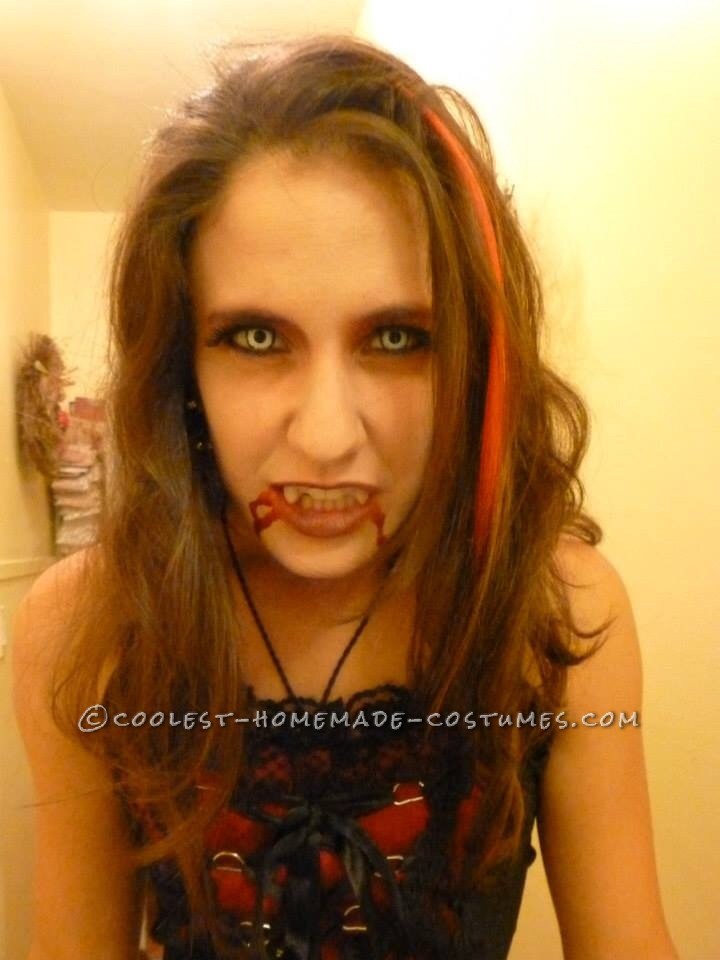 In order to keep with the frightful spirit of Halloween, I decided that the perfect costume would be one that really represents the theme. I knew exactly which feeling I wanted to elicit from people- and that was shock! So instead of going the other way and wearing a sexy costume that would shock most people because of how little bit there was, I decided to create a more positive effect and create that shock factor with little details that go a long way.

The first thjng I thought about and purchased was the teeth. These vampire teeth Can be found easily online. It requires you to glue them on with the special glue provided. I must advise, patience is a must but iR’a totally worth it. The next item I purchased was the red hair extension. These, like the teeth, were inexpensive. I simply clipped them into my hair: one on the left towards the front and one somewhere (at that moment I surely wished I had eyes in the back of my head) in the back more towards the right.

As for the dress, I used a gothic Lolita dress that I had bought a few years back for a Miss Lovett costume. Its such a great idea to reuse old costumes and transform them into others. We all hate throwing out a costume after wearing it for only one night, so why not transform it into an even better costume! This dress was perfect because the length went midway on my thigh and it was long in the back. The dress was a mix of satin and lace and was dark red and black. The top half of the dress was corset-like.

As for makeup, I gave myself a whitish tiny on my face by using a light makeup application. I used a mix of black grey and red eye shadow to create a smoky dark look. I enhanced my eye lashes with fake ones that can be found at any pharmacy and purchased fake blood which I left drop off my lips to create a realistic effect. My costume was really getting along but I knew I had to get one more item- the contact lenses! I searched endlessly on every possible contact design and settled on the “Eclipse” contact color which were light blue with a black outline. I must admit I spent 30 minutes fussing and swearing trying to put on the first contact lens. I had never worn them before and had no idea how to wear them. Then, the second one went in perfectly within two minutes. I was almost annoyed at how quickly the second one went in compared to the first one but finally they were both in! These contact lenses gave everyone the same first reaction “Woah!” Some of my friends claimed that it looked so realistic they were having difficulty looking at me while speaking.

My thoughts were “intimidation! Hehe”. I knew my costume delivered what I had sent out to do when I went to a club in NYC and even the bouncers were freaked out.

The best part about all this – my teeth fell out towards the end of the night (my FAKE vampire teeth)! 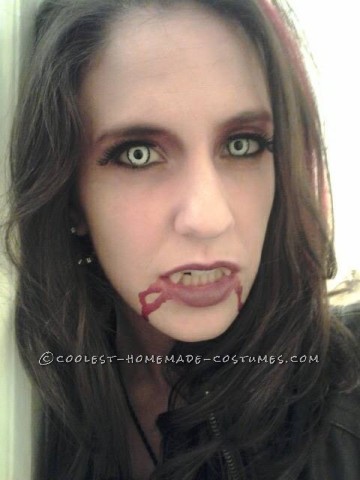 Suarez the Vampire and Chiellini the Zombie Costume: The Famous Bite