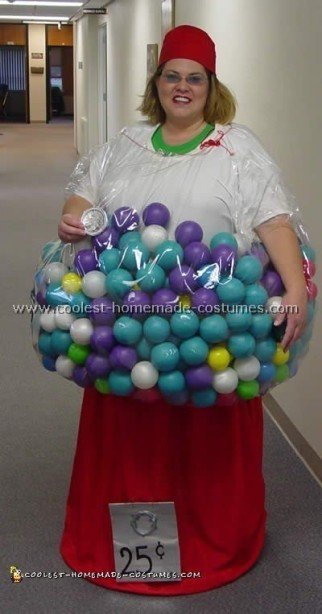 I got this unique costume idea a couple of years ago to be a gumball machine but with a large clear leaf bag and balloons. But when I saw this costume on your web-site I knew it was do-able. I too got the plastic from Wal-Mart (in fabric). I actually sewed an old t-shirt onto the lining for a snug fit.

Then I bought a couple yards of red material for the base. But we used boning along the bottom of the base. I highly recommend you use a thick boning or a hula-hoop as the other costume did. Also, I bought the silver gift bag from the dollar store, also found some rubber play handcuffs. I just cut off one handcuff and glued it to the gift bag. My hat was a child’s summer hat and one thing my niece did was she took a yogurt lid and covered it with aluminum foil and drew ‘Liberty’ ‘in God we Trust’ and Washington’s head for the quarter.

submitted by Jody U., Madison, WI 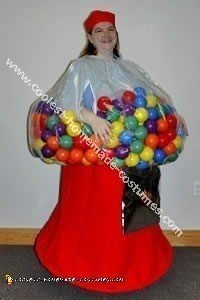 I created this costume using a pattern for a pumpkin costume. Instead of using orange fabric I used clear vinyl. You can buy clear vinyl by the yard at most Wall-Marts. I bought the thickest they had but if I were to do it again I would use the thinner vinyl as it would be easier to sew!

Then I sewed a liner inside it and filled it full of colored “ball pit” balls. I used a pattern for a full-length flare skirt for the base and used a hula hoop at the bottom to make it flare out. It’s hard to see in the picture but the coin slot is actually made out of a shiny silver gift bag and a battery-operated light-up fan. I had to put large eyelets around the bottom of the globe and used a drawstring to keep it around my waist.

I got first place for this unique costume idea at a costume contests at both my job as well as the Halloween party I went to on the weekend. The hat is just a beanie made out of the same material used for the base.