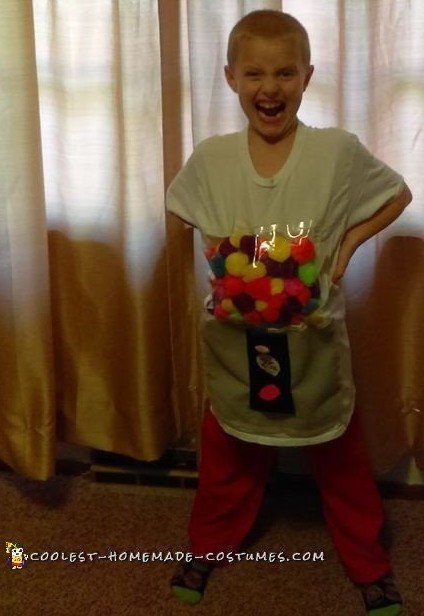 After I googled DIY gumball machine costume, I found lots of them. And most of them were for girls wearing red skirts. I can’t sew. So I knew I had to ask my sons great grandma if she could do that part for me.

To make his costume I took a white t-shirt from his pajama drawer. I went to Joann Fabrics and bought a yard of red flannel for his pants, 2 bags of colored pom poms and black and gray felt. His great grandma had a clear piece of plastic to sew onto his shirt, she left an opening in the top of the plastic so we could stuff it with the pom poms.

She sewed him a pair of pants from the red flannel I had bought. Then she sewed the gray felt onto the shirt and then used the black felt to make the spot where you insert the money and take out the gumball. She added a little wooden piece to make it the handle to spin to get the gumball out. Also, she made a pocket in the bottom so we could take a pom pom and put it in the pocket to make it look like someone had put money in and twisted the handle for a gumball.

When he saw it all finished, he loved his gumball machine costume. He wore it to go back to his dad’s and his dad said it was so cute and our son’s face just lit up. He did a great job choosing a unique costume and great grandma did a great job making it all.