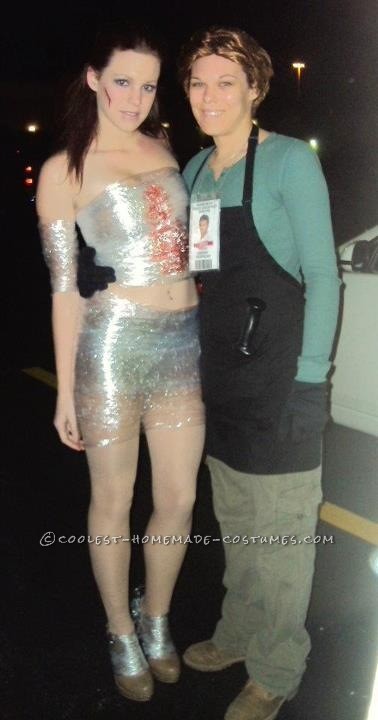 My partner and I were stumped as to what our costume was going to be last Halloween. That was until my boss at work was about to throw away a roll of plastic wrap. Then it hit me! We would go as “Dexter Morgan and his Victim”. This was a perfect idea for us since we are huge fans of the show.

With only 3 days until the Halloween party I rushed to the local costume store to pick up a few things;

The remaining things I could find around the house;

I decided to make an I.D. badge for Dexter like the one he has on the show. I just copied a couple of pictures from a search engine and put them all together in paint, printed it off and glued it to a piece of cardboard. I used a plastic protective sleeve to makeshift lamination. I then found a long chain to feed through the badge in order to hang it as a necklace. (photo provided)

I couldn’t wait to put it all together! I knew we would look so awesome! So finally on the night of the big Halloween party we got everything together.

Dexter was ready to go!

My victim costume was a little more tedious though. Let’s start from the top…

I decided to do a messy, off the face hair style. I simply teased the crown of my hair and pinned it back. For my make-up I darkened my eyes and made my skin very light otherwise. The signature cut on the cheek was easy.

– Use black eyeliner to create a black line along the cheekbone to add depth and make it stand out,

– Go over the line with some blood-red lipstick, and/or dark eye shadows ([purple,blue,black,grey] for a slight bruising effect)

– lastly, I dragged some fake blood downward on it and placed a drop at the end of my fake cut so it would look like I was bleeding a bit.

The next step was the outfit. After getting all my nude colored garments on I needed to literally wrap myself in cling wrap. Honestly, this was annoying and it made me dizzy. You will understand why if you ever attempt this costume. I required some help, so be sure to have some patient helpers around!

(my shoes were too big, so I cling-wrapped them to my feet, and it ended up being an interesting addition LOL)

We got SO many compliments on our costume and I was so flattered and excited when people asked to have pictures taken with us! The only downfall to this costume is trying to top it in 2012! 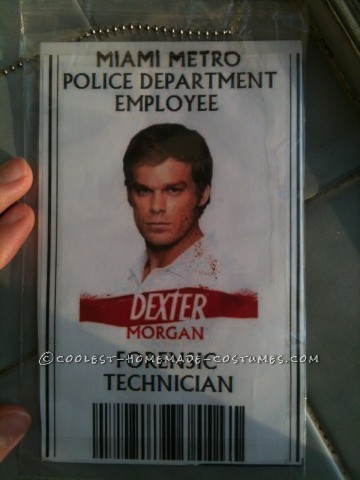 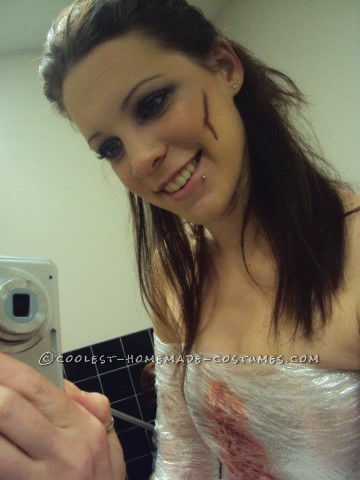 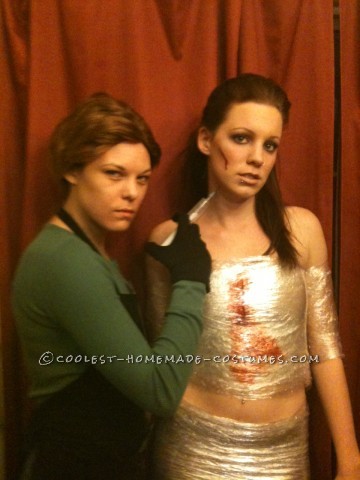 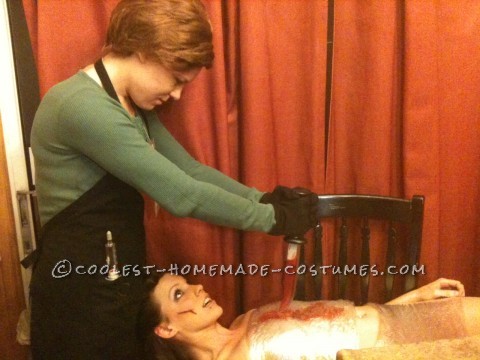 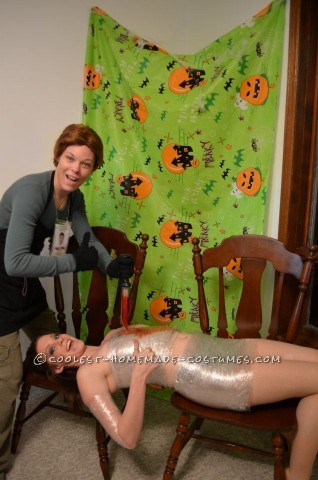 15 thoughts on “Unique and Easy DEXTER Costume with VICTIM”