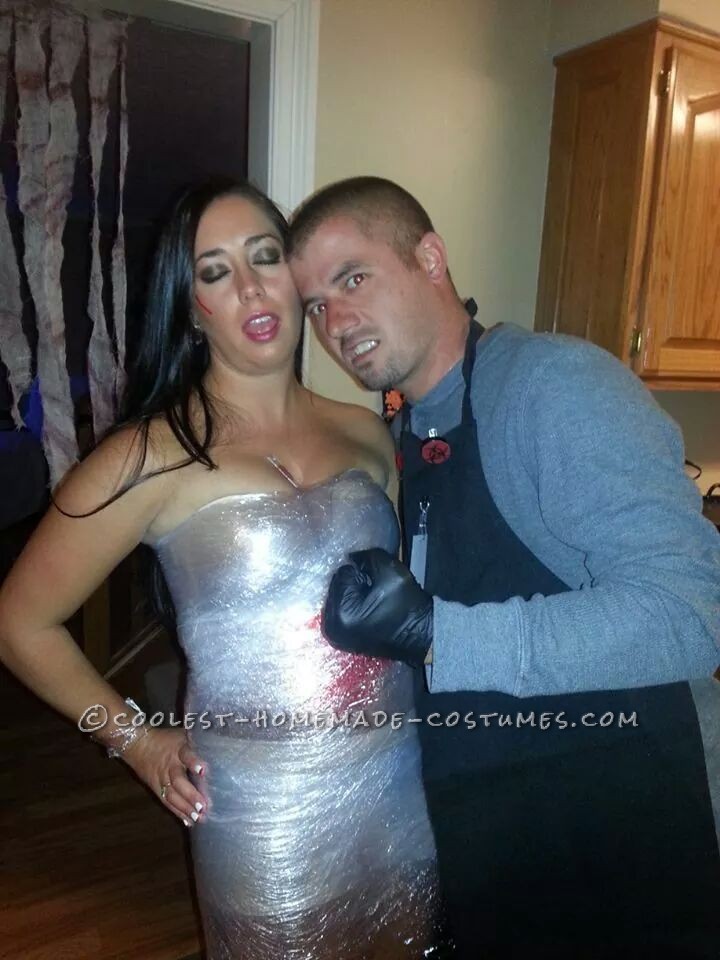 Halloween is my favorite Holiday and every year I host a party. My husband and I are huge fans of the show Dexter! We had just gotten married in September and needed a costume that was cheap and easy.

I went to the dollar store and got 3 boxes of saran wrap. I also had a flesh toned bra and flesh toned spanx shorts. I had one of my friends go around  me wrapping me in saran wrap. Across the chest we did a zig zag to make the chest part dip down some not so straight across, almost like a bow shape. We did from my chest to my waist then stopped. The bottom half is separate. Very important note is while being wrapped you should stand with your legs apart that way you have space to walk and to go to the bathroom! I forgot this till about halfway through, we cut little slits on the side so that my thighs could move. For the knife stuck in the stomach I took a plastic toy knife i already had and just cut the knife part off so it was just the end. I layed down and my friend poured fake blood on my stomach then she put the knife sticking out, while I held the knife she took more saran wrap and wrapped around the knife. We secured everything with clear wrapping tape. I put seran wrap around my wrists and ankles to mark how Dexter ties his victims down. I also had white wedges that I splattered with paint to look like drops of blood, did not get a picture of those. I’m telling you when you are throwing a big party you forget to focus on yourself! ;)

I took hard plastic and made blood slide earrings for myself and necklaces for me as well as my husband. I cut the plastic to size, dropped red nail polish on it, used a glue gun to put two drops of glue one on each end then put another slide on top of it. I also used makeup to put a cut on my cheek how Dexter does.  I made my husband a Dexter badge and laminated it. He wore dark khakis, dark gray long sleeve shirt and a black apron. He also had black gloves and one of those retractable fake knives.. He had a wig but forgot to put it on.

Also made Dexter themed cupcakes! There were red velvet with cream cheese icing, i took candy blood and drippe dover them, i also baked some sugar and made little shards of edible glass.

All of our friends loved our costume! No one had to ask who we were. 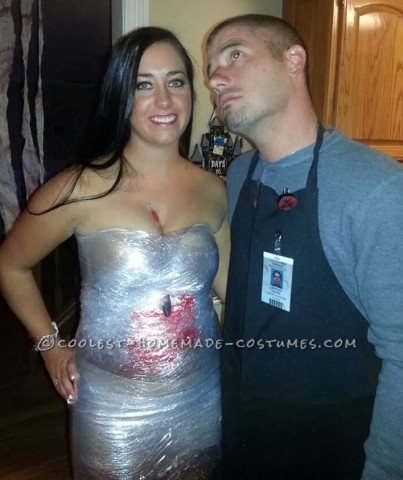 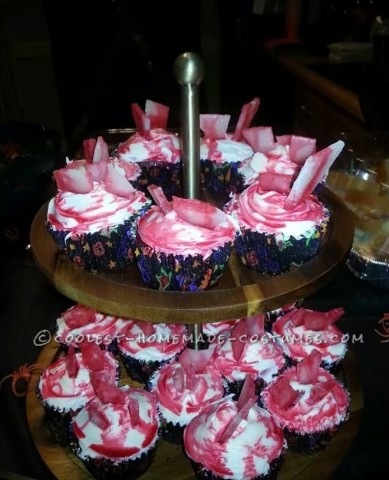