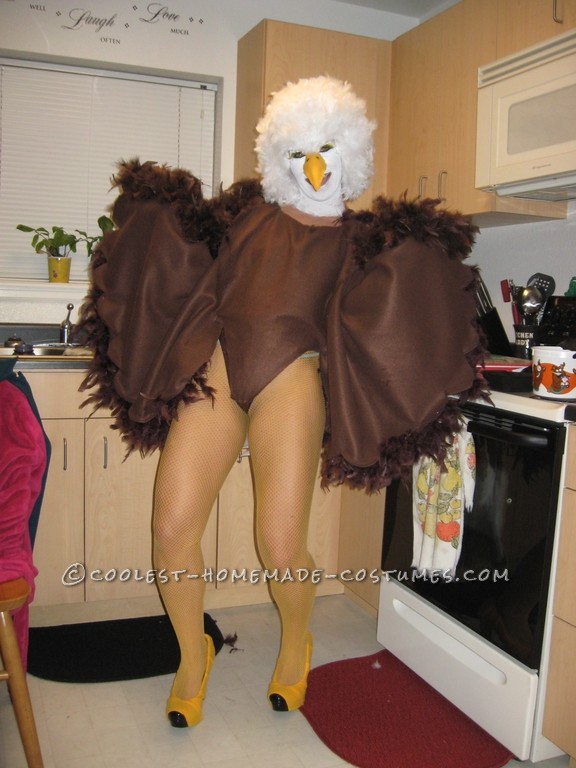 My head piece started with a plain masquerade mask in which I hot glued single feathers to it and cut the bottom of the mask of and attached a beak which I used a which nose and golden yellow fleece and hot glued to the nose area of mask. I got a white ski mask and hot glued white feather boas to it and also attached mask to ski mask. to make one wig like piece. My makeup was basic clown white makeup, false feather eye lashes, black eye liner and mad hatter style contacts. I wore golden yellow fish net leggings and took a pair of old black pleather pumps and hot glued the golden yellow fleece to them in a pattern and left the black showing in the front like a claw. Ended up cutting slits in the body so arms can come out and also at the end of wings so hands could come out and arms covered. Was a time consuming job, but very fun and everyone took pictures with me, Thought I was a show girl in Vegas. Hardest part was the body suit- would have been easier if someone else was gluing on me vs me burning myself..lol

I got this idea from my boss who said my hair color (bright blonde on top, brown bottom) reminded him of a bald eagle. I was like, “Vince, you just gave me my Halloween costume idea!” My best friend shook her head, like, “oh great, here we go.” I think I did a pretty good job at being original and unique. No one had my costume, and no one was a bald eagle. I thought this was the perfect costume for the year of the election too. So it all worked out perfectly!