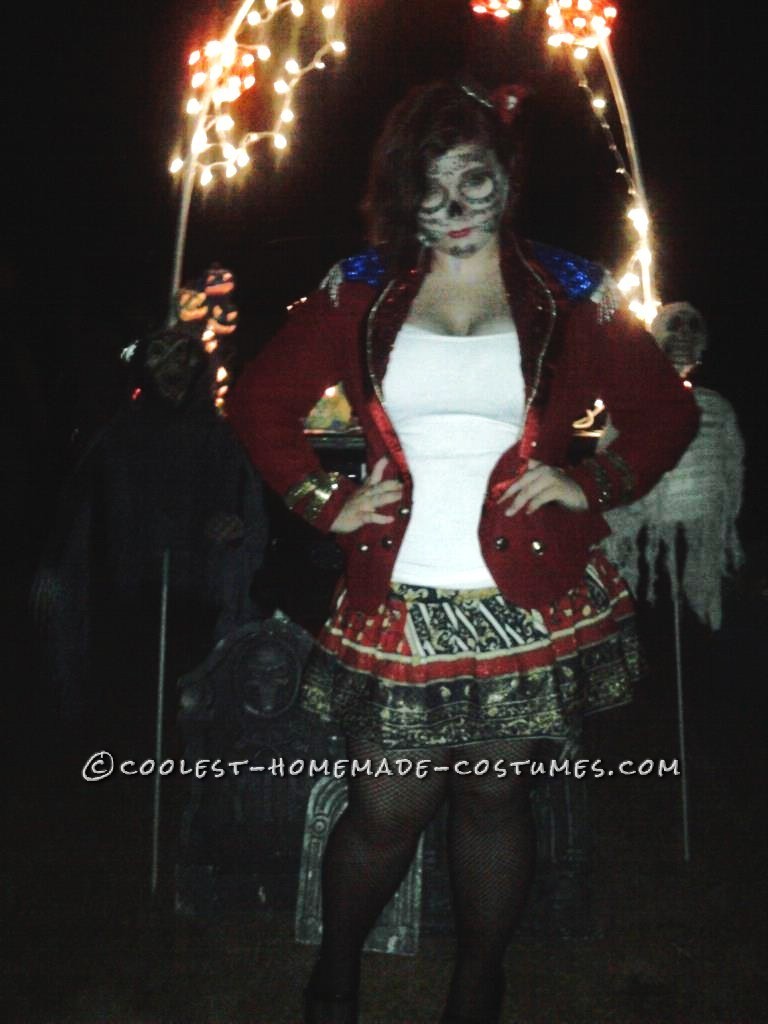 Okay, so my 15 year old daughter wanted to be a “Ringmaster” for  Halloween and we’re like broke as a joke and costumes online cost upwards $60+.  Well, for about $15 and some ingenuity we made her a prizewinning thrifty homemade Woman’s Ringleader costume.  I happened to find  a red short waisted jacket with satin lapels at a local thrift store for only $3.  When I brought the jacket home, she wasn’t very enthused but tried in on anyways and loved it but was very skeptical being rather plain.

Over the next few days racked my brain ‘how do we decorate this costume’?  I did more thrift shopping in hopes to find a coat with tails or band jacket, etc without any luck, all the while still focusing on the red jacket at home and lack of funds on hand. I didn’t find another suitable jacket but I found these awesome glittery red spike heels at the Goodwill in her size but opted not to get them unknowing their exchange policy or if she’d like them, fit in them, or what she had envisioned.  I wanted to get the costume as close to what she wanted as possible.  Anyways, after school I took her back to check on the red glittered heels  and they were gone.  I got her so excited by describing them BUT she found the pair of black leather shoes that SHE had envisioned and we snagged them for only $2 and we picked up some fishnet thigh highs they had for .50cents….our project was looking a little better now.

My daughter tried everything on when we got home and she didn’t like the thigh hi’s because they didn’t look or feel right and I didn’t like the shorts (from her wardrobe) because I thought they were too short and tight and didn’t really flow with the jacket, so we were back to the drawing  bored.  I’m racking my brain because festivities were approaching and fast.

My mother had been a seamstress for many years so I go plundering through her stuff for items to accentuate the jacket without much luck (she had gotten rid of most of her stuff from throughout the years).  Then we started digging in our closets. That’s when I found a blazer and skirt from the 80’s that no one had fit into for years and I never really knew about the skirt and I’m thinking there’s a couple of blazer’s hanging in my closet  so I went to find buttons. Low and behold I found 10 buttons off of 2 older items and underneath one of the blazers was the skirt you see in her outfit, it was printed with tassels and such and had a circus feel to it, it definitely had all the colors we needed, but it was a size 12 (too small for my daughter). I kept staring at the skirt wondering how and if I could make it work, then I was like…wait a minute, this skirt has a ruffle on the end and originally comes knee length or longer, what if we hike it and she wears the lower part like a mini-skirt/petticoat or maybe we can put a slit in it.  I couldn’t wait for her to come home and try it on.  When she got in from school she tried it on and absolutely loved it  (I was worried she’d think it was old/ugly.)  So now, we had an outfit…we needed to decorate it, accessorize with a hat, etc.

I couldn’t find a top hat anywhere in town, I checked thrift stores, dollar stores, costume aisles…nothing which I felt was odd because I just knew I’d bought one from Dollar Tree before, but I think they put those out around New Year’s and I couldn’t find any around my house.  I placed an ad on my FB on a for sale, wanted, or free site and found her a hat for $5…a homemade hat which was made out of a small round piece of cardboard, a styrofoam pint/quart container (similar to a styrofoam cup), fabric, hot glue, feathers, and ribbon.  A scratched up CD would’ve worked just as well and been twice as sturdy and anything with a cylinder shaped for the top would do and I’ve found that scraps of material from your closet works very well…the flat bottom of the hat had cloth glued around it as well as the top with pretty creases, then the two were glued together.  The top piece had a piece of cloth folded to look like a ribbon with feathers attached to one side and a small card with 1/2 on it and a long piece of iridescent satin ribbon attached to the bottom for a chin strap (to tie under your chin.)  When we got the hat we took the note card off and added some of our glitter poinsettia leaf and gold rick-rack as we were using it for a ringmaster costume and they had used it for a mad hatter.

Before we actually picked up the hat…we still had the dilemma of the costume still being kinda plain (not shiny enough).  I was skeptical at first to decorate it because my daughter had said she might wear the jacket to school sometime…then I was like, it was only $3 and I bought if for a costume and I am going to re-purpose it and a costume it shall be.  I knew about how I wanted it but didn’t know how I was gonna get it. Then, it hit me as I was sorting old costumes to be donated.  I found my embellishments. I cut the fake leather pieces off of one costume and had her glitter it gold while I ripped out the shoulder pads from the jacket I had taken the buttons off of and had her to glitter them blue…then we cut the beading off of some Christmas decorations for fringe.  We put all that together to make a drape around the back from shoulder to shoulder, we hot glued it at each shoulder to the red blazer.  I had some old glittery looking red poinsettia’s and we took the leaves off and hot glued them to the lapel on the flat material only leaving the satin trim showing. I found some gold rick-rack that I had for another project and outlined the lapel separating the glitter from the satin.  So now we had red glittery lapels with gold trim, 10 buttons that we safety pinned on, and a shoulder piece attached that we made out of shoulder pads, glitter, glue, Christmas fringe, and a piece of old costume, and we made two gold glitter cuff rings out of the old costume pieces and gold glitter and hot glued them on as well.

Finally her jacket was complete…with some ingenuity.  After getting her jacket glitzed we found that the skirt, although it was printed, lacked something, so we lustered it up with hand brushed glitter paint and gave it just the right amount of shine to compliment the coat.

Having four kids and trying to find Halloween costumes and being a thrifty shopper, I had been all over town.  I found her face tattoo’s (2 in a pack) for only $1 at Family Dollar stores and she accentuated the tattoo’s with make-up we already had. I found her a pair of fishnet stockings for only $2 at a Beauty Mart (place that sales hair extensions/wigs/make-up etc.).  The blazer was $3 from a local thrift store. The shoes came from the GoodWill $2 and the skirt was found in my closet and she wore her own tank/cami.  We used glitter, glitter paint, Christmas items, glue, and other items found around the house to decorate.

I hope everyone enjoys the pictures, the story of the thrifty homemade Woman’s Ringleader costume, and becomes inspired.  It doesn’t take a lot of money to look like a million bucks.  Happy Halloween everyone! 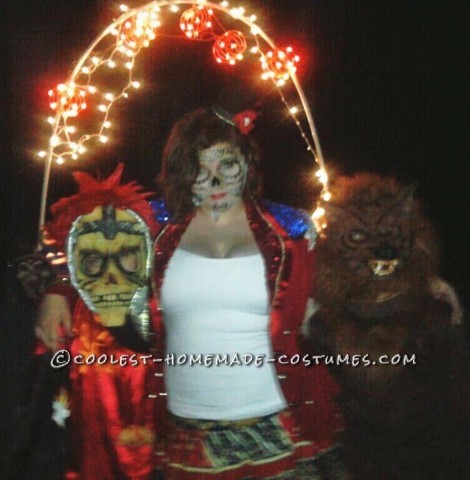 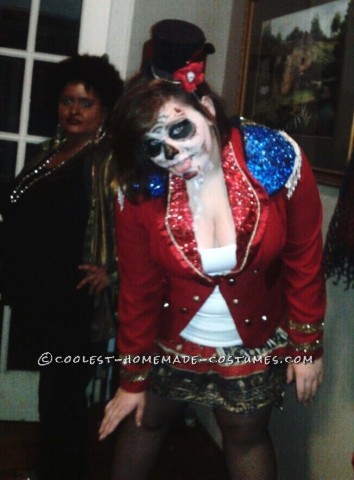 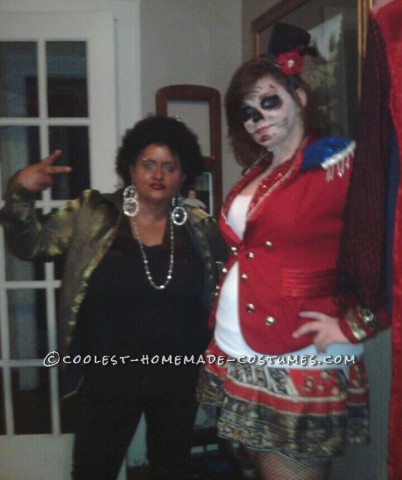