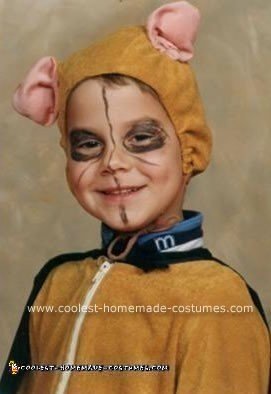 This homemade boy lion costume was originally made for a costume-party my daughter was invited to when she was 7, and was meant to be a mouse-costume. That was what she requested, a mouse-costume with a long tail,and also what she got. She was very pleased and it made a success at the party, as homemade as it was.

When her younger brother, my second son Lukas, turned 5 years, he inherited the costume, but in his eyes, this was without a doubt a LION suit! He was very in love with it, and I had promised to enhance it with some kind of lions mane around the face… something I never got to do.

But he used it heavily, both at home, on the playground and in kindergarten. Very often with varying facial make-ups… this lion was a fashionista, you see!

Sadly enough, I don´t have any more photos of him wearing it, in my family we’ve never been good at documenting our lives in photograph. This particular photo was taken at his kindergarten, the yearly photo session arrived and he refused to take off the costume and wash off his “lionface”… thank god!! This is how we today have this beautiful memory of the most handsome little lion there ever was!!!

I made the homemade boy lion costume of some old fabric I had in the closet, it had a furry feeling to it, but not to much, so it would be easy to wash. I just used a body pajamas to make the pattern, on the front I put a zip, on the arms and legs ends elastic bands.

Then I made a long tail, filled with fabric and some fringe at the end. This tail was very exposed, dragged through dirt and pulled by other kids…

The hat was the toughest to make, but I made it real simple as you can see: I studied how baby hats are done, and made one a few sizes bigger.

The ears are not so elaborate as you probably can observe. But they made the trick, no-one ever suspected this was a child in a lions clothes! haha! :-D